What is the staircase layout of 12 Grimmauld Place?

I've been having trouble picturing the layout of 12 Grimmauld Place in my head. Specifically, in the fourth chapter of the Order of the Phoenix,

The three of them looked cautiously over the banisters. The gloomy hallway below was packed with witches and wizards, including all of Harry’s guard. They were whispering excitedly together. In the very center of the group Harry saw the dark, greasy-haired head and prominent nose of his least favorite teacher at Hogwarts, Professor Snape. Harry leaned farther over the banisters. He was very interested in what Snape was doing for the Order of the Phoenix. . . . A thin piece of flesh-colored string descended in front of Harry’s eyes. Looking up he saw Fred and George on the landing above, cautiously lowering the Extendable Ear toward the dark knot of people below. A moment later, however, they began to move toward the front door and out of sight.

This passage implies there is a large gap between the staircases that continues up until at least the third floor. On the other hand, it says that Fred and George are on the landing above, implying there aren't any landings between floors. I can't picture a stair configuration that allows for viewing down multiple floors and also has stairs that don't turn or curve between floors. Am I taking this part too literally or just not being imaginative enough about staircases?

You can play the HP5 game, and then explore that location yourself, or if you can't play for any reason, you can watch the walkthrough of the game.

First time visiting Grimmauld place (it is the first chapter of the game, so it's mostly tutorial):

The second time, during Christmas vacation:

I don't see why the stairs shouldn't curve around in a circle; I imagine them looking something like this: 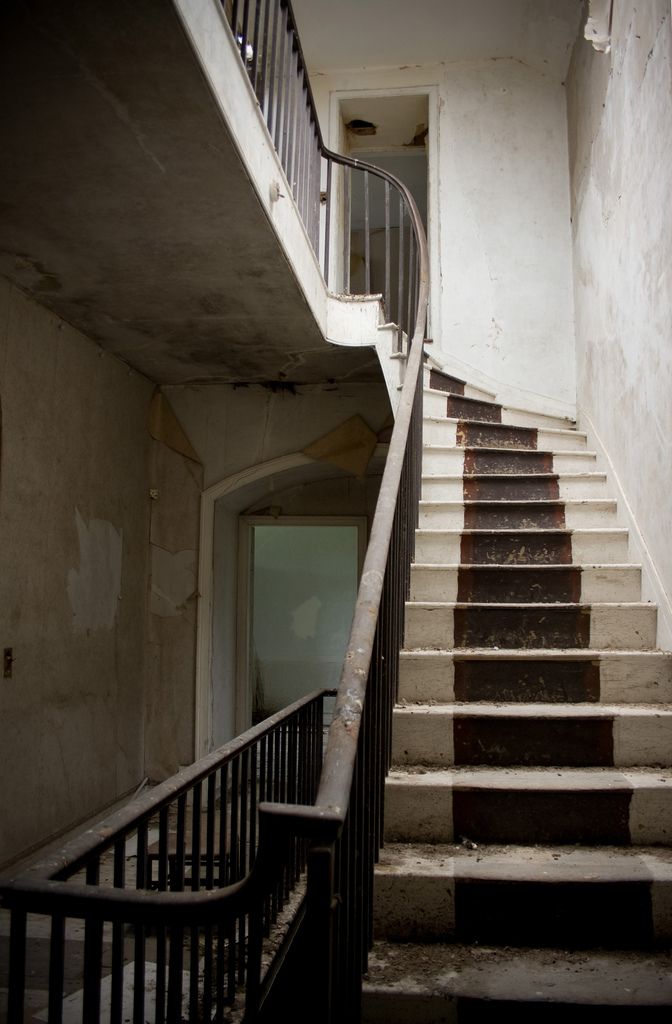 The second landing where Fred and George are at the top there, Harry, Ron and Hermione on the first floor landing, and the stairs continuing down another flight (you can just see the banisters turning in the photo) to the ground floor hall, with a gap running down the whole centre allowing them to see the people in the hall below.

Not the answer you're looking for? Browse other questions tagged harry-potter architecture or ask your own question.