In a memoir by Algis Budrys in Worlds of If, A Retrospective Anthology, he writes

I remember-unfortunately not in detail-a short story in which a returning white astronaut finds the US firmly in the hands of blacks. The blacks were depicted as rather middle-class types, given to three-piece suits and lip-service liberalism, which made their ineradicable basic antiwhite racial bias all the more poignant. The whites were called "sharkies" – this was long before the common use of "honky"…

He goes on to say that it appeared in Worlds of If in the early 1950s.

My searches have failed to turn up the story. Can anyone ID it?

Alan E Nourse's "Marley's Chain" as per this review, appearing in If, September 1952. 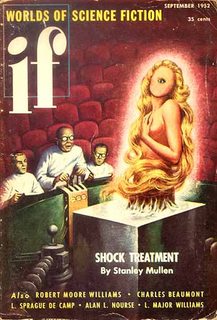 Nuclear wars, fought among the whites, have turned them into a minority; majority of those living are now blacks (I guess author is referring only to US?) There is some sort of uprising, bringing out centuries of stored hatred – so it's now a black man's US where whites ("Sharkies") aren't welcome.

Tam Peters, a white man, has just returned after many years of work on other planets to find his US has no place for him anymore. He will eventually resolve his dilemma the way of Kurt Vonnegut's "The Big Trip Up Yonder" (download)!

Not the answer you're looking for? Browse other questions tagged story-identification short-stories algis-budrys or ask your own question.