Why is River Song's timeline backwards?

When River Song first met the Doctor, it was at the end of her life. Since then, on each occasion, she meets the Doctor a earlier in her own life.

Why is this? Is there an in-universe explanation?

I would have thought that, since they are time travelers, they can meet in any order they like.

There isn't an in-universe explanation for this, as in universe, this isn't the case. From River's perspective, her final meeting with The Doctor was the adventure which ended in her death. But once she was imprisoned in Stormcage, The Doctor visited her often. Some of these visits are in the Doctor Who blu-ray extras. These visits would take place in between the episodes of Doctor Who that we see, and these visits would therefore prevent them from consistently meeting earlier and earlier in River's life.

River Song's Timeline isn't backwards (and neither is the Doctors). Their individual timelines move forward from birth to death (in the loosest sense of the word) but as time travellers they are free to visit any time and space in any order.

When they meet at specific historical events in time they have each come from different points in their individual timelines and it is these journeys that are in opposing orders.

The clearest demonstration of this I've seen is here: 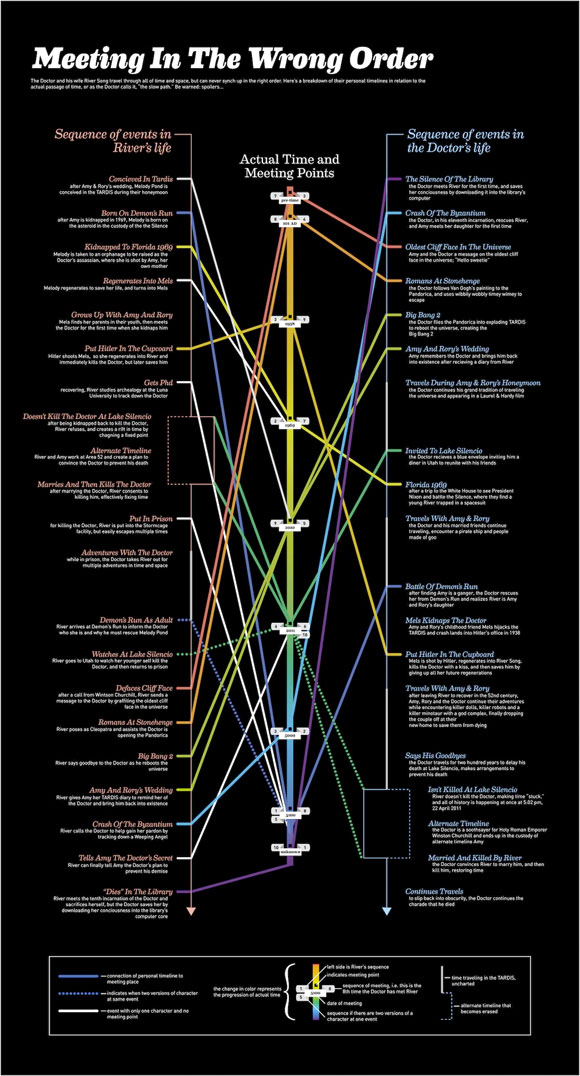 Why are their journeys destined to bring them together in this order? Well that's just the unfortunate fate of Star crossed (Time crossed)? lovers.

Though it's speculation, I believe their meetings are Fixed Points in Time that is they can't meet in any order they want. With both of them being:

It makes some sense that the way time moves between them is more rigid, else any

They are fated to meet in the order prescribed.

If you remember the whole incident about her being taken as a child, she is taken in "A good man goes to war" ( I think that is the title) and the next time we see her in the Doctor's timeline (or at least the next one I can remember) is Let's kill Hitler. Even though she was only an infant at the first point, she met the Doctor for the first time there and the rest of the following events were in order for her. Her last meeting with the Doctor (when she "dies") also may not have been the last of her. There are stories about consciences being transferred from memory banks and the like to living bodies. Take The Doctor's Daughter who was created from his DNA. Anyway, back to the topic, it isn't two straight timelines running parallel (one backward, one forward)... "People assume that time is a strict progression of cause to effect, but actually, from a non-linear non-subjective viewpoint, it's more like a big bowl of wibbly wobbly timey wimey... stuff." Just remember that what we see onscreen is linear, the Who-niverse is not.

If river never saves the doctor in the library. Then she more in likely wouldn't have exist in the first place. By older river saving the 10th doctor it lets the 11th doctor meet Amy and Rory, who in turn conceives a child on board the tardis while it is in the time vortex. This child is taken by the silence where she ends up as Amy and Rory best friend. She then gets Amy and Rory to started dating that will start the chain of events that lead to her birth. So basically that's why her life is fixed because altering it could mean she never existed. It's backwards cause it makes more scenes that way.

The little girl killing the Doctor at Lake Silencio is River. This is the main ponit in history. If this doesn't happen all of history takes place at one time and time freezes since there needs to be a contact between them. SO when the Doctor invites River to see him get killed by River as a kid, she resists. And all of time collapses and everything takes place at once. To undo this the Doctor fakes his death and marries River, so there is contact between them and time unfreezes but everybody thinking the Doctor being dead. Just understand this, River is Doctor's Future and Doctor is River's past as we see it in the episodes. Coz as we move forward we move ahead in Doctor's life but backward in River's life.