Fantasy book where main character hunts demons with his master

The main character gets taken away from his home by the master. Their main weapon is a staff that he holds in his left hand with a hidden blade in it. The back of the book had the message "Don't read in the dark".

There was a girl named Alice(?) with red hair. They only ate a small amount before going out on a hunt. I seem to remember the word "Apprentice" being in the title but I could be wrong about this one.

This is one of the Wardstone Chronicle (AKA The Last Apprentice) books by Joseph Delaney. Without more detail, it's quite hard to pinpoint a specific book but The Spook's Battle (AKA Attack of the Fiend), for example, mentions a character named Alice, demon-hunting with a master, a staff with a hidden blade, etc.

The Spook was finally satisfied, and we moved on to something he'd only introduced me to a few weeks earlier.He handed me his staff and led me to the dead tree we used for target practice. I pressed the lever to release the hidden blade in the staff and then spent the next fifteen minutes or so treating the rotten trunk as if it were an enemy threatening my life. Time and time again I drove the blade into it until my arms grew heavy and tired. The most recent trick my master had taught me was to hold the staff casually in my right hand before quickly transferring it to my stronger left and stabbing it hard into the tree.

All of the books in this series bear the legend

WARNING:
NOT TO BE READ AFTER DARK

on their back covers. 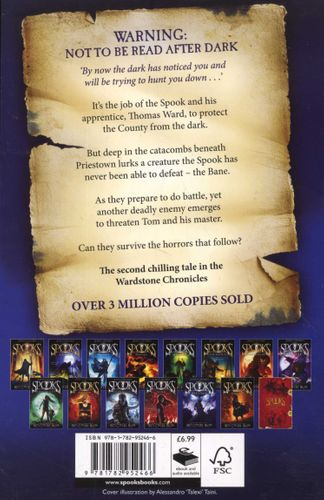 7
Trying to remember the title of a zombie novel
8
YA book about a human girl who saves an cat-like elf guy, deals with racism and magic and a prophecy
15
2000s fantasy book with a red-haired protagonist meeting companions from her previous life, including a troll
10
Fantasy book - Druid novel
5
Book: Phalanx trying to steal gyroscopes
9
Coming of age fantasy book- main character trains by dying fighting demons
3
There was this cartoon show that I used to watch as a kid. I don't really remember but the main characters were 2 guys and a girl?