Did Thanos use the full power of the Power Stone to punch Captain Marvel in "Avengers: Endgame"?

In Avengers: Endgame, in one of the final scenes, Captain Marvel overpowers Thanos in a hand-to-hand combat. Thanos had to pull the Power Stone out of the Gauntlet, and then punch her with the raw power of the Stone.

According to Marvel, in the MCU, Captain Marvel is the most powerful hero. Captain Marvel was the only hero who could overpower Thanos in hand-to-hand combat. 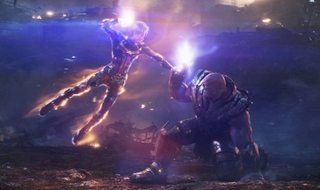 Scarlet Witch could overwhelm Thanos but with her psionic energy and Thanos forced to call an air strike from his ship to save himself. Thor and Captain America couldn't subdue him even with Stormbreaker and Mjolnir. You can watch the related scenes here.

Here is a relevant excerpt about the Power Stone:

When facing Iron Man, Thanos was able to concentrate the Stone's energy into beams powerful enough to heavily damage the Avenger's armor with a single blast. Thanos was also able to project a force field of energy that was powerful enough to block Iron Man's repulsors at full charge. A blast from the Power Stone could even knock out a being as powerful as Captain Marvel, while a sustained blast could presumably kill any being in the universe, including Ronan the Accuser.

Did Thanos use (or have to use) the full power of the Power Stone to punch Captain Marvel in Avengers: Endgame?

I know there were cases in the past where he didn't use the full power (or more damaging power) of the Stones. For example, it is explained with an element of surprise where he couldn't stop Stormbreaker with the Stones.

In the Power Stone article, it says that a sustained blast presumably kill any being. Does it mean that the power of the Stone needs to be channeled for a longer time period on powerful beings to kill them?

If there are more details in the comics, you can give an additional answer from the comics as well.

Maybe, but we don't really know, there's no real detail to these things. What do you determine as the "full power"? For example, with the Reality Stone, is the full power changing all of Knowhere to look different, turning Drax and Mantis into something else or the illusions of Titan? The main point is he used a lot of power of the Power Stone, most likely instinctively.

Here though it seems Thanos used the raw power of the Power Stone rather than anything else.

Jeff Ford (Editor): When Captain Marvel arrives, that was in the script from day one, the way she comes through the ship. We knew she was going to do that, but what we did alter and add and expand later, mostly because of how much we loved what Brie was doing with the character, was her fight with Thanos before he power punches her back. Anthony came up with the great idea – this was a reshoot, by the way, at the last minute – he had the great idea that Thanos pulls the power stone out of the gauntlet, and then he punches her with the raw power stone. That is a fantastic use of that prop and that story point, because that’s what you want. And we had to find a way that he could sideline Captain Marvel for a minute, because she’s so powerful, there’s no way to do it.

Jeff Ford (Editor): I think it sells the notion of how powerful she is, and then having Thanos take her out shows how powerful he is, which then transfers all of that dramatic energy to Tony.

For completeness sake the official script doesn't give any insight here:

CAROL PRESSES THANOS DOWN, BUT BEFORE HE FALLS...

THANOS PULLS THE POWER STONE FROM ITS HOUSING AND PUNCHES CAROL, SENDING HER FLYING.

Decidedly not. The ability to destroy a planet is insignificant next to the power of the Force ... nothing.

Hence its name, the Power Stone represented the destructive nature of the universe, and was incredibly powerful, capable of annihilating entire planets. The Power Stone was used by the Celestial being Eson the Searcher to destroy planets and civilizations until it was forgotten inside the Orb for millennia.

Given that it's "highly likely to kill any organic beings that touch it", and we even see some of our heroes begin to disintegrate simply by touching someone else who is touching someone else, who is holding it... that unleashing the full power of the stone would presumably kill everything in the surrounding area because it's capable of annihilating(*) entire planets.

(*) Try to imagine all life as you know it stopping instantaneously and every molecule in your body exploding at the speed of light.

But it is one thing to have a limitless power generator, and another to be able to draw that much power from it. If the stones were emitting even a fraction of their energy by just lying around, then the universe would cease to be. 0.00001% of infinity is still infinity.

The Power Stone in particular hurts anyone who touches it, but that's a flat amount, not a fraction. It barely chafed the skin of Peter Quill and his pals; you can do that with a piece of sandpaper.

The Space Stone was being used for energy extraction by the entire nation of Nazi Germany, and they could only figure out how to get enough energy from it to produce some feeble laser weapons.

The point is: the energy potential of the Infinity Stone is not defined by the stone itself (or if it is, it's just "infinite"), but by the process or equipment with which you extract the energy. A bottomless well contains an unlimited supply of water, but you can only pump up so much.

That's what the Infinity Gauntlet is for. It is a unique device because it can harness a universe-spanning amount of energy. The gauntlet was even more special than the stones. And every single attack on a gauntlet-wielding Thanos over the course of two Avengers movies was directed at his glove: disable that, and he cannot use it. If you keep his fingers apart, the stones, omnipotent as they may be, are just pretty gems adorning his knuckles.

And that is what Carol was doing. She was using her entire energy potential, no matter where it comes from, to keep Thanos's fingers apart. She was going to break them off, and render them almost useless.

So what did Thanos do? A move of desperation: he forewent use of the gauntlet, took out the Power Stone, and punched Captain Marvel with it. It's like he used an unpowered electric screwdriver by stabbing a wall with it.

It's tough to say if Thanos used the full power of the Stone when he hit Captain Marvel, but it was clearly powerful enough to break through her durability shield and knock her out momentarily. She gained cosmic power through the Tesseract which makes her biologically more powerful than Thanos' base level as an Eternal. This is why she is able to survive such attacks from an Eternal and ONE of the Stones...

If Thanos were to use the combo of all the Stones at once, then it would be considered "full power", and would most likely kill Captain Marvel.

Not the answer you're looking for? Browse other questions tagged marvel marvel-cinematic-universe avengers-endgame infinity-stones captain-marvel or ask your own question.

17
Why didn't Thanos make a minion get the Soul Stone?
8
Why is Thanos so tough at the beginning of "Avengers: Endgame"?
11
Is Thanos more powerful in Endgame than he was in Infinity War?
24
How did Captain Marvel do this without dying?
4
How did Thanos have his sword after being hit by Mjolnir?
0
What are Thanos's motivations for destroying the Infinity Stones?