What evidence supposedly supports Tau as related to the Necrontyr?

I've heard of rumours saying that the Tau from Warhammer 40K are in fact the Necrontyr. Is there anything that supports this statement, in WH40K canon?

Helping Necrons? Or are they Necrontyr descendants?

GW may have planned a race that simply prepares a pacified, multiracial galaxy for Necrons to feast upon, supported by Ethereals that have a C'tan phase blade. Then there is a reference of "dark seed in east" by the Deceiver, so the tricky C'tan might give Tzeentch the finger in the JUST AS PLANNED competition. Or maybe GW just has so little creativity that they simply made a new civ conforming to an Old One's standards without knowing it.

Is this the connection I heard of?

Absolutely nothing to date would support that statement. Seeing the Tau having always been listed as a very new race overall and the Necrontyr as one of the very oldest races in the Galaxy.

They share no physical traits, the Tau have very little if any psychic ability and very advanced technology, but none of it relates to the gear used by the Necrontyr. On the other hand, Games Workshop has been known to retroactively rewrite their fluff pieces to say almost anything, without warning, superseding all of their previous works.

These two maps should make the distinction between the two agencies, the Tau and the Necron/Nectontyr very clear. The first is the Necron Empire. It spans the ENTIRE GALAXY and beyond the edges at some points. This references their empire predating all of the existing empires except for the Old Ones, with whom they fought and were previously written having lost against. This map is from the Necron 5th Edition Codex. 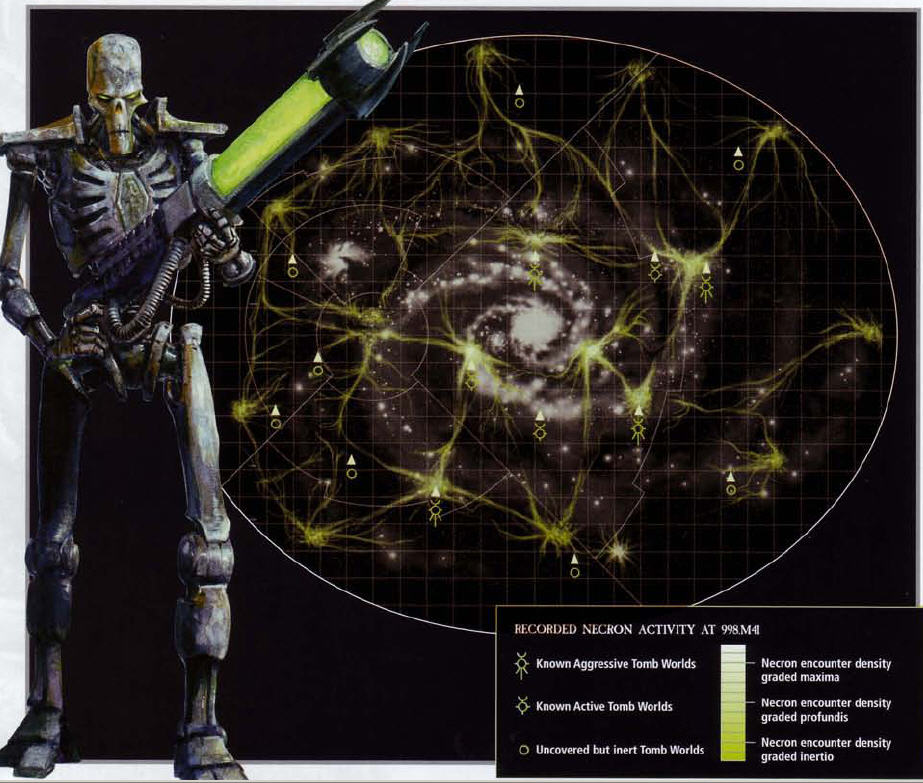 Necron Galactic Expansion: They can be found ANYWHERE!

This map also from the 5th Edition shows the Tau Empire. A very new race just making their way on to the scene. The Tau Empire is a rapidly expanding alien stellar empire situated within the Imperium of Man's Ultima Segmentum, near the Eastern Fringes of the Milky Way Galaxy. The Tau Empire was founded by the Tau caste called the Ethereals, who lead the Tau Empire in the name of the philosophy they have named the Greater Good. Note the tiny signature of their empire against the backdrop of the entire galaxy. The Tau may be highly advanced, but they have covered almost nothing of the effective galaxy as of this point. 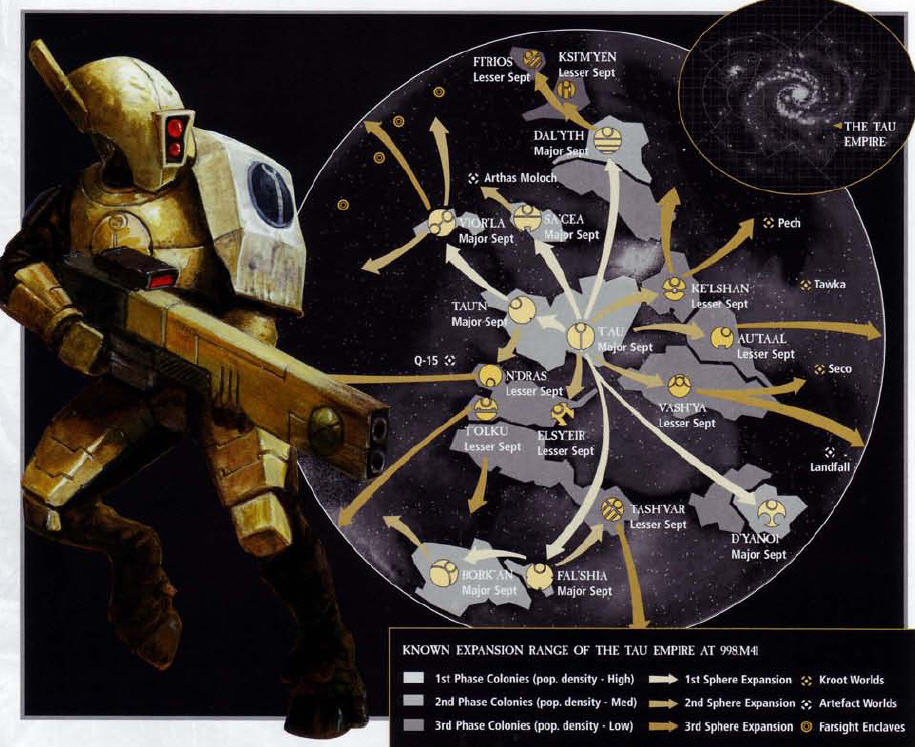 The Tau Empire. Yes, that little dot next to the arrow that says WE ARE HERE!

The old Necron codex did say that "most" of the Necrontyr were taken in by the Deceiver, not all. It is conceivable that a small group escaped, settled an out-of-the-way desert planet (thereby escaping the notice of their undead brethren), eschewed technology and what they called themselves for the same reason, and kept the vast majority of the population ignorant and isolated in order to keep off the radar, so to speak. A small group of elites would keep apart from the general population and preserve what they could of science and technology, just in case the right moment came.

When the Imperium showed up, the elite group (Ethereals) saw that by virtue of another race besides Old Ones and Necrons even existing that meant that both the former were either dead or no longer powerful in any meaningful sense. Their sudden appearance to the now Hunter-gatherer Necrontyr (or "Tau") and the subsequent massive upsurge in technological innovation strongly point to this conclusion. The fact that an obviously Necron artifact like the Dawnblade was able to be wielded without killing its user, but still corrupted his mind, lends credence to the idea that the Tau are the descendents of the only survivors of the robotic transformation of the Necrontyr.

The emphasis by the same Ethereals on "the greater good" would come from the desire not to repeat the same ambition-driven drive to dominance and physical immortality that compelled their ancestors to make a deal with the Devil (literally). It represents a turning away from the dark side of their natures in service to a noble (enough) cause. That was the cause for overwhelming concern when Shadowsun showed up to the Ethereal council carrying a Necron weapon and boasting about his personal genius and ruthless tactics, which got him exiled immediately.

Also, as an aside, the word "Tau" itself could have been taken from the "T" in the last part of "Necrontyr", ("Tau" is the Greek word for the letter "T"). Obviously the Necron part would be odious to those who saw what happened to their people at the hands of the Deciever, but some identity with the original people would be desired, so the distinguishing "T", or "Tau" was kept.

Not sure if you're still bothered with this but in some cases of black library texts it is hinted that the Necrotyr created the Tau... this may not be true but if it is it can explain the former "coincidences," of the tau having little presense in the warp AND a facination with technology... so much that their need is beginning to consume them... I can see a patern here as the ancient Necrotyr allowed
themselves to be consumed by technology...

1
Did any Necrontyr survive enslavement by the C'tan?

7
Has the Tau empire encountered Necrons yet?
1
Did any Necrontyr survive enslavement by the C'tan?
10
Have the Tau ever allied with Space Marines or Eldar?
2
Did Moties from CoDominium influence the Tau from WH40k?
7
Why are the Tau so resistant to Chaos?
4
Is the Emperor really related to these people?
4
Is Princeps Rank related to the Titan Engine they drive?
6
Is there anything in the lore that supports this game mechanism for the Dark Angel in the 3rd edition?
3
What colour is Tau blood?