Movie: in a big seaside city time travel portals open to the apocalyptic future with the fading sun and zombie mutants

I hardly remember anything! It's an old movie or can be a part of a series from a 90'.

It takes place in a big seaside city, maybe Los Angeles or San Francisco. Portals open to the apocalyptic future, where the sun began to fade. The protagonist gets across one and meets a couple of human survivors who tell him what's happened. Some sort of zombie mutants began to appear, typical human-hunting distorted monsters in rags. They where humanoids and looked like a zombie and mummy combined with bandages. I think maybe there was some environmental protection message, the plan was to solve the pollution problem in the past and change the future.(?)

Maybe because of the strange portals his friends traped in an office in the past and worried for him.(?) The protagonist takes an American football, writes something on it and throws it into a smaller portal. Then in the past, its flying through a curtain of the office window and hits a guy on the head.

In the end the man fights the biggest ugliest zombie monster and go back home in the portal.

I don't know why, but for some reason I remember David Hasselhoff in it. Not the Sliders, Doctor Who, Primeval, Time Cop, Sunshine, The time machine, Morlocks.

Your mention of David Hasselhoff made me think of Baywatch Nights. The episode seems to be "The Vortex" (1997), based on your description and some googling. See the list of episodes.

OP has indicated the correct episode was actually "The Mobius", the IMDb plot of which reads:

Ryan's old school friend, Ashley, arrives and takes her and Mitch to a research lab where she and her husband work on developing an inanimate laser. After Mitch, Ryan and Ashley accidentally step into the laser, they "slide" in time to a parallel universe where they must fight for their lives against the creatures inhabiting the world.

In the video below, the bit with the football ball travelling in time can be seen at 34'39:

Possibly Time Machine: Rise of the Morlocks or simply Morlocks, a 2011 Sy-Fy movie?

A 2011 television movie originally named Morlocks (renamed Time Machine: Rise of the Morlocks) produced for Syfy, starring David Hewlett, and Robert Picardo. The plot sees a time machine open a portal to the future allowing Morlocks to travel back to the present and wreak havoc. These Morlocks are descended from a patient with terminal cancer whose father used the military time travel project to look for technology in the future as a cure. One of the first Morlocks to escape through the portal into the present is captured and has its DNA extracted; paradoxically, it is treatment with this DNA that causes the patient to mutate into the first Morlock.

This review mentions it having a plot that "seems cribbed off from a lesser episode of Primeval". I can't locate the movie (nor English subtitles for that matter) so I can't confirm the fading sun, but this movie still certainly looks like post-apocalyptic dusky atmosphere: 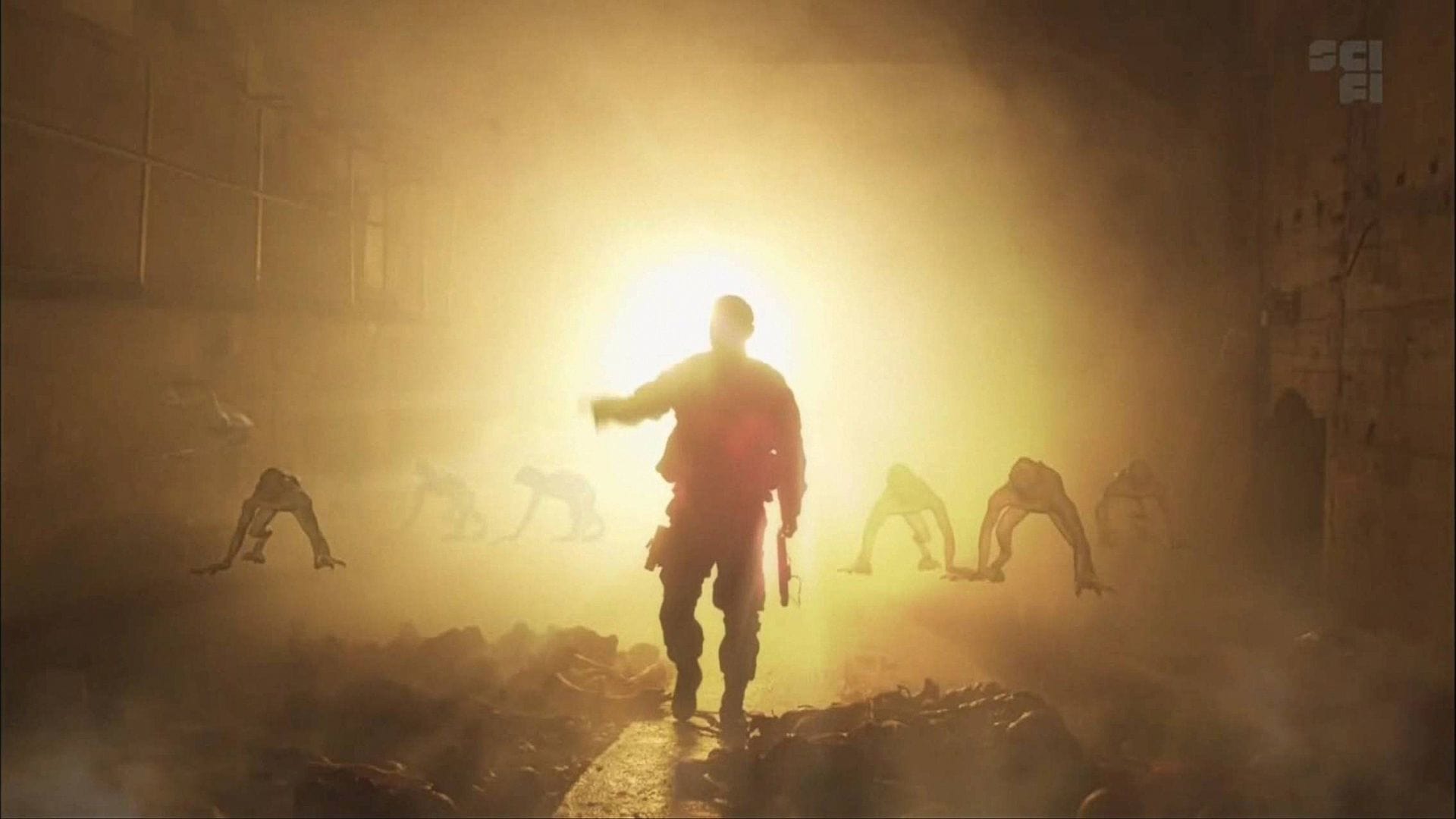 Found with the Google query science fiction movie "portal * future" which yielded the movie's page on the Time Machine wikia.

7
Movie about monsters that come through a portal from the future
4
Zombie film with airborne disease. Protagonists head toward safety at the coast

13
Movie about some cowboys who travel into the future (to our time)
13
Story with time travel into the future and uncommunicative post-humans who bury themselves
5
Name of movie involving time travel with a ruby ring?
8
Animated movie with time travel and where people where enslaved in mines
20
Early 2000s movie about time travel, protagonist travels back to save girlfriend, then into multiple points in future
11
Movie about two cops investigating and fighting with green-blooded, zombie-like people with superpowers
4
Oddball post-apocalyptic movie with mutants and a suicide drug in little bags
6
Apocalyptic movie with either mutated monkeys or gargoyles in New York City
17
Short story about time travel and refugees from the future