Superhero book where a teenager accidentally manifests his powers when defending himself against a bully, only to learn that his father is a superhero

I believe I read this around 2015 as a Kindle book (I'm looking through my library now, although it's kind of clogged with titles around that time), I think as a $0 promotional item. The protagonist is a teenage boy who, when hassled by a bully at school, accidentally manifests his powers (I don't remember if it was super-strength or some kind of a blast), and knocks said bully backwards, injuring him (not life-threatening, but I think there were some broken ribs involved). Shortly thereafter, his father reveals himself to be a superhero. I don't think the mother had powers, but the father had the classic "flying brick" powers, I think, and was going to train the boy in the same. Complicating matters, a long-time nemesis of the father had just broken out of where he was imprisoned. After that, my memory gets a bit hazy other than that the father has his son training with a flying drone somewhere high up when they're attacked by another drone created by the villain.

I'm 90% certain that it turns out the villain broke out because he learned that his son (the aforementioned bully) had gotten hurt, and he was seeking revenge, and I think said bully winds up with powers himself, although I don't remember any details, or how the conflict resolved. 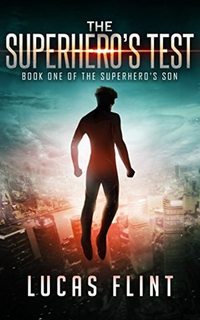 Seventeen-year-old Kevin Jason starts his first day at his new school by unintentionally punching the local bully through the cafeteria wall. When Kevin's father, a legendary superhero, learns of this, he insists on training Kevin to master his new powers, though Kevin finds his father's training methods a lot less exciting than he thought they were going to be.

But Kevin's training takes on new urgency when the local bully's father—Master Chaos, one of the world's most dangerous supervillains—breaks out of prison and declares Kevin his new archenemy for harming his son.

After I made several more specific queries, I tried a generic query of kindle superhero books and the cover was the fourth suggestion.

3
Adventure movie about a boy collecting magic coins
7
Fantasy anime. Main protagonist is the son of a blacksmith
7
Trying to track down a bizarre superhero comic involving gifted children who reunite in adulthood at their father's funeral
7
Fantasy comedy romance novel, set in medieval times, involving a siege, a nun, and enchanted pickles
3
Paperback book, read in the 1990s, involving a man's son playing a too-good pirate video game with friends who disappear
2
Kindle superhero series including an army guy in powered armor, a self-aware robot, and a teleporting thief
1
Kindle EBook about a boy who finds a smartphone that lets him cast spells
2
Ebook (Kindle?) involving a teenager railroaded into becoming a superhero versus aliens
3
Novel involving a girl and her sister with powers (at least one over death), invited to join people with other powers
2
Book series involving a teenage girl whose mother doesn't let her leave the house, until the day her mother disappears and two men attack the house