Set in a post industrial world where old technology is forbidden and everything is steam/air powered. Has flying ships (boats that fly), evil orkish looking industrial bad guys led by some big monsters that they go to war with. Good guys have stuff like clip fed crossbows, fantasy creature races are also involved, MCs are an inventor and a princess. Inventor is white/blond haired, princess is asian/black haired

It begins with the inventor MC rebuilding a jetpack from the old and crash landing near the princess MC who has it destroyed. After the war with the industrial orcs starts he enlists with his pet owl thing. War is lost in the first battle and the princess is captured. (I think because her elder brother betrays them or flees).

The inventor, his friend(s) and the princess retinue (tutor, few soldiers, and a small fairy) save the princess from the orc industrial ship. I remember the princess complains about going to the bathroom until they take her to the orcs simply demolished bathroom but she sneaks out a side exit and finds the inventor. I think the fairy enchants or gives them enchanted blades and they slide down/cut through the orcs sails at some point.

They then go out to recruit other groups to help stop the orcs. I remember their being romantic tension between the 2 MCs.

I remember a scene where they are going to visit a walking crocodile empire/smuggling town and the whole crew has to get inoculated first.

2000-2010 release (when I read it as a kid in the library). I think it had utopia or topia involved in the name but everything I’ve Googled has not been the correct manga so this may be a false memory.

I happened across a forum post about a manga with a talking Dolphin in it and it was the same one! it is Neotopia! 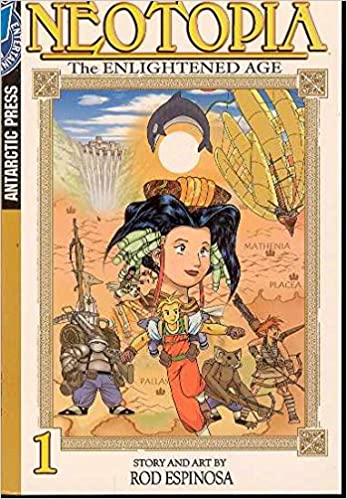 In a world where Man has at long last learned to live and work in harmony with Nature, the citizens of Mathenia live a good life under their beloved Grand Duchess. Unknown to them, she is Nalyn, a commoner standing in for Nydia, the real Duchess. Doing Nydia's dirty work is tough enough, but then Nalyn is kidnapped by an enemy empire bent on bringing back the age of world-hurting technological excess. And once rescued, she must then lead her country to war.

It is actually in full color but only had 5 issues. But I highly recommend it!

Not the answer you're looking for? Browse other questions tagged story-identification dystopia manga or ask your own question.

10
Pre-90s anime with a red-haired man in an outer space war shot at the ending
15
Short story about spaceship powered by cheese
7
Post-Apocalyptic / Dystopian novel - Technology is forbidden, boy discovers something and village is going to kill him so he runs
5
90s (or earlier) Japanese anime movie: two planets at war, young man is in love with princess from the other planet, and floods his own village
6
Manga where two students are reincarnated in another world with magic and adventurers
1
Manga where a boy and his house are transported to a magical world and he is extremely powerful there
4
Manga where the MC returns to his world and can still use magic