This is either a novelette or a couple of linked short stories. Based on the fact that I associate it with a digest-sized Vincent Di Fate-esque cover, I believe it's probably something I read in Analog in the 1980s or 1990s.

I recall the aliens being hairy humanoids of approximately human size. One of them might have had silver hair. Earth encountered them as they were doing a Krikkit (all this has to go) and trying to sterilize the entire galaxy; their homeworld was doing nothing but producing warships to wipe out life-bearing planets. Earth beat them, at the cost of killing every one of them; they would kill themselves before admitting defeat.

But a number of alien ships were discovered with their crews in suspended animation. (It's possible that an Earth ship found an asteroid or comet that was carrying a group of alien ships at sublight speeds.) Trying to thaw the aliens out and talk with them is how humans discovered their ability to secretly communicate, but ultimately the aliens were still suicidally omnicidal. The aliens are somehow wired so that when they hold hands their secret communication is more trusted than even what they see and hear.

In the story, a group of humans has somehow managed to raise (clone?) a group of young aliens and are trying to instruct them so they don't share their species' xenocidal tendencies. At a critical moment, one of the humans holds hands with an alien, and uses a prosthetic form of the communication channel to reassure the young alien that humans are real people. The story ends with the possibility that the aliens might be able to learn to live with other beings.

I found this by looking through every Analog cover until I saw this one: 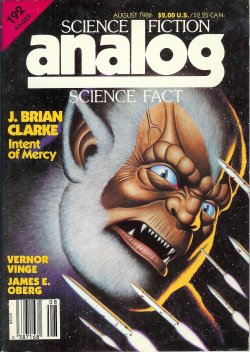 I instantly recognized it; that gave me an author, J. Brian Clarke, and a story title: "Intent of Mercy".

ISFDb tells us that every story in Clarke's The Expediter series was published in Analog between 1984 and 1989. Digging up my old Analogs, I found that my "linked short stories" guess was correct.

Gia studied the photograph. "Those?" she asked, pointing.

David nodded. "Tiny sensor pads. Vewy sensitive, much nerve network behind. All over palm of hands. When hold hands, Silvers communicate near good as talk."

And, just to show that even my more random guesses aren't always bad, the stories were collected in paperback as The Expediter (1990) 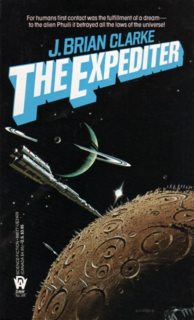 ...with a cover by Vincent DiFate.