Who told Clark about the bullet train problem?

In the rebooted Action Comics issue #1 (The New 52), the police's bullets were failed at shooting the strange new creature which was also known as Superman, so Sam Lane consulted Lex Luthor. Lex Luthor planned to shoot the world's biggest bullet at the face of Superman. He made Lois Lane a bait and caused a bullet train to malfunction.

Well, he was successful. Superman was captured.

Lex Luthor didn't know that Clark was Superman, so he couldn't do this. Who told Clark about the problem with the bullet train, as it wasn't broadcast to the public?

This one's a bit of a toughie but I think I've got it puzzled out;

Clark's new editor at the Daily Star, Mr Taylor had already gotten wind of a plot between Glenmorgan and an unnamed associate (who we know to be Lex Luthor) to sabotage a train. That's why Clark/Superman was spying on his apartment in the first place.

When Glenmorgan confesses to scrimping on track safety and bribing officials that should be enough for the city to order a full shutdown of all trains. When Clark mentions that he's just spoken to Jimmy Olsen and one train (the Bullet) still seems to be running (and that not only that, but one of Glenmorgan's goons; "Gus Grundig, Glenmorgan’s ex-enforcer" has just boarded) then Mr Taylor deduces that this is the train that they intend to crash or blow up.

Advised of the danger by Mr Taylor, Superman rushes to the scene and saves the day, but not without personal cost... 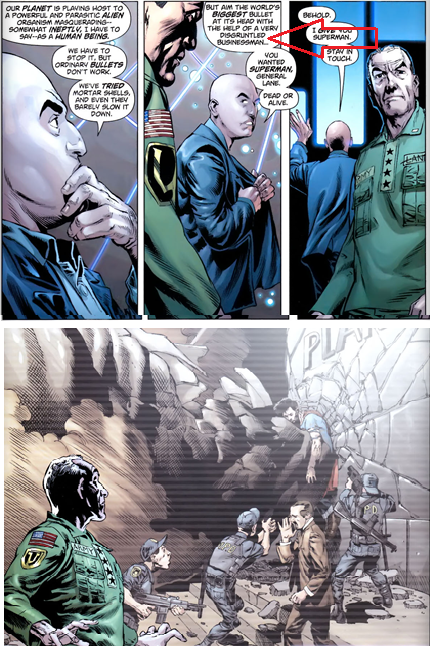 Not the answer you're looking for? Browse other questions tagged comics dc superman the-new-52 or ask your own question.

83
What makes the world so oblivious to Clark Kent's secret?
22
How have Superman comics dealt with the Man of Steel, Woman of Kleenex problem?
24
Does Clark Kent have a weight problem?
5
What is the origin of the idea that Lex Luthor is Jewish?
13
Why does Superman use the Clark Kent persona?
20
Clark Kent captured by Aliens who think he's a typical Earthman
8
Even with his powers, doesn't Superman train and work out?
8
Has Superman ever willingly revealed his identity to Lex Luthor?
19
Has either Batman's or Superman's identity been accidentally revealed by someone in the comics?