Story about a princess who will become queen in the future, trying to find knights for her knights of the round

I read the manga only a few months ago, but I can no longer find it. It had a decent amount of chapters already translated to English. While I'm not completely sure, I think the amount was somewhere in the 30s.

The story is about a princess. If I recall correctly, she has two older brothers who were fighting over the right to succeed the throne. To avoid all of that, her father (the king) decided to just make that princess the one to become queen.

Because of that stuff, I recall her having some nickname along the lines of 'leftover princess'.

I think I recall the name of the princess starting with an 'L'. I also remember her using Cia, or Sia (something like that) as an alias when going into town.

I'm not sure for the reasons behind it anymore, but that princess had to form this order of knights to serve her before she could become queen. Where the story was when I read it, she had 2 people in that knight order. I think one of them was called Duke, or something along those lines.

I think she also had the ability to go to some place where there were past kings of her country and she could talk to them.

There was also a part I remember where she mentioned having the powers of some swords in her. Like 12 or 13 swords if I remember correctly. She used the power of one of them to save someone from a curse at one point.

With the amount of similar manga I've read, I'm not 100% sure about much more, but I'll be glad to answer any questions that might clarify things if I'm able to.

This is The Leftover Princess and the Knights of the Round Table (Okoborehime to Entaku no Kishi).

Leticia's father, the current king, is very wise and knew that both of his sons have their own supporters and that if either one became king the other brother's supporters would rebel, and the country would have a civil war. So he decided to announce that he will retire while he's still alive and make his daughter, the princess, his successor! However, the princess never expected to be Queen and she really doesn't have any political allies. So she decides to gather a group of knights loyal to her and form her own "round table" before the day of her coronation. The problem is, all of the good knights who are strong and skillful and loyal have already been snatched up by her father and brothers for their own personal guards. 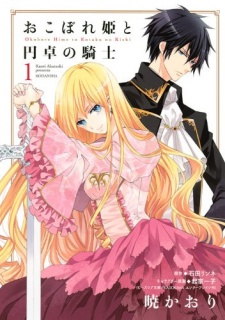 19
Story about girl who must become REAL to inherit throne
21
I'm looking for a book series about a Queen that time travels to save her people
6
Book where a girl who makes potions is framed for trying to hurt a princess
3
Manga where the hero's party defeated the demon king but the demon king cursed them
3
Manga about a noble's daughter, possibly an isekai
8
Fantasy book from the mid-late 90s about a princess with a sun brand on her hand
4
Black & white manga involving a magic sword-wielding general (possibly ex-general) and a princess
2
Looking for a manga or hentai about the son of a lord who reluctantly chooses his first slave on his birthday