I’m looking for a 90's -00's anime I saw on TV on a channel called Spacetoon about 17 years ago. Here is what I remember from it:

It’s set in space and centers around the crew of a spaceship that is always on the run from the bad guys. The majority of crew are women, and the main character is a woman. In one episode they buy a turret from a junk dealer. The turret looks like its from a ww2 battleship and attach it to the button of the spaceship, which is strange since the ship has all kinds of laser weapons.

One of the bad guys is a old bald man with a very long white beard. After failing his superiors one time too many he is punished by being imprisoned and having hundreds of red tubes stuck into his body. In a later episode we learn that he is being used as a power source for the bad guys new superweapon that can teleport bombs into enemy ships and instantly destroy them from within. There is a lot of build up to this, but the superweapon is destroyed the first episode it's used.

I think that it is Lost Universe.

Here is a bio of the bald guy with a long white beard (quoted from the Roy Glen page of KanzakaDex):

Roy Glenn (Japanese: 紅蓮翁 Rōmaji: guren okina) was a member of the Nightmare Syndicate with a role of strategist.

He tried numerous times to capture or kill Kain Blueriver but even when working with Kali, he failed (and also failed to kill her too). As punishment, the Spreader of Darkness had him forcibly absorbed by Nezard.

Could it be Angel Links, this series takes place in the "Outlaw Star" Universe. 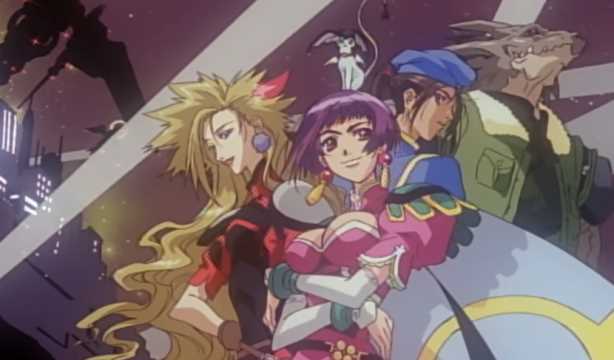 Not the answer you're looking for? Browse other questions tagged story-identification anime space or ask your own question.

7
Sci-fi series with a war against pink blob-like bad guys who can mentally inflict pain
5
SF novel with sentient planet that consumes the bad guys
3
Sci-fi anime with two protagonists that lead (opposing) armies in space
1
Anime about a group of guys looking fo a girl that can fused with their individual powers
4
2000s (or earlier) anime where the good guys try to reform bad guys with an amulet. Failure results in the enemy turning into trees
7
Mech fighting anime where the good guys deliberately lose
5
Space Anime with super large spaceship, lonely cube AI and young girl crowned as its queen!
2
Anime from the '80s where a spaceship is penetrated by a pod containing a transparent, green, gel-like monster