Did other federation starship classes appear in TOS?

In episodes of Star Trek, the original series, I see other ships that are Constitution class. Did any other classes of Federation star ships appear during this series?

Yes, but not many and it might depend on your definition of "Federation starship".

In "The Way to Eden", we see the Class J vessel Aurora (NC-17740). It's never explicitly referred to as a Federation vessel but its theft falls under Starfleet jurisdiction and it has a Federation-style registry number in the Remastered episode. It also follows the normal Federation vessel "design language" - grey with two warp nacelles extended on pylons. 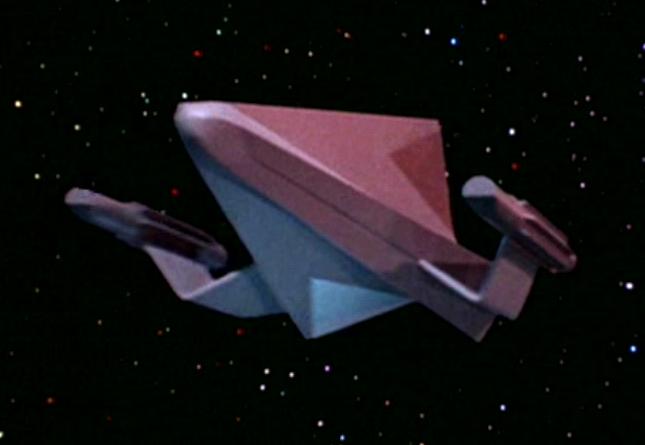 And then this in the Remastered episode:

There's also Harry Mudd's vessel from "Mudd's Women", which is a blob of light in its original appearance but uses the same Class J CGI model as the Aurora in the Remastered episode. It's a civilian vessel (and an "unregistered" one at that) but I think it's safe to call it a Federation design, at least.

Ex Astris Scientia has a fairly comprehensive list of ships that appeared in TOS. Not counting shuttles, these are the only two which seem to be Federation-aligned vessels but which aren't Constitution class.

There is no mention of specific starship classes in TOS.

The dedication plaque on the bridge by the turbolift door says:

But I don't know if anyone can read it onscreen in any scene with even the highest resolution.

In "Tomorrow is Yesterday" Kirk said to Christopher:

Kirk does not specify how much like the Enterprise the 11 (or 12) others are. Thus we can't tell whether the 12 (or 13) are a small special subset of whatever class of ship the Enterprise is, or else a broad category that includes several different classes of starships or even all starships.

One of the diagrams on a monitor screen Khan is reading in "Space Seed" is for a phaser bank for a Constitution class starship - if you can read the writing in it.

In "The Doomsday Machine", they enter star system L-374:

KIRK: Try to raise it, Lieutenant.

SPOCK: I have it on the sensors, Captain. By configuration, a starship stopped in space. She appears to be drifting.

PALMER: No answer, Captain. All I get is the automatic beacon.

All other Federation Starfleet starships seen in TOS also look a lot like the Enterprise. Thus they certainly fall within the definition of starship configuration.

It is possible that the other starshps seen in TOS "actually" look less like the "real" Enterprise, but the producers of TOS saved on money for special effects and models by reusing Enterprise models, and so made them look more like the Enterprise than they "actually" do.

And that is all the data given in TOS canon.

Some memos that were reprinted in The Making of Star Trek, 1968, showed that the production staff believed that all starships belonged to the same class as the Enterprise, and that there were only about a dozen starships total in Starfleet in the era of TOS. And of course there is considerable discussion about the validity of such near canon sources.

Not the answer you're looking for? Browse other questions tagged star-trek spaceship star-trek-tos or ask your own question.

34
Were there REALLY over 73,000 Federation starships commissioned?
17
Did the Federation actually have consistent naming conventions for their ships of the line?
7
Who names starship classes?
14
Constitution Class in TNG era?
7
Other starships that can undergo saucer separation?
32
Did Starfleet ever have an Enterprise-class of starship?
16
During Star Trek TOS were there only 12 Constitution-class starships in all of Starfleet?
8
During Star Trek TOS - how many starships were there in all of Starfleet?
26
Did the Federation have any large starbases orbiting other planets?