Adult comic about a robot that exterminated all organic life

It was about a robot who had exterminated all organic life in the universe, but hates his job, and later gets divorced by his wife. He also has a son that curses a lot, and later saves his world from aliens. 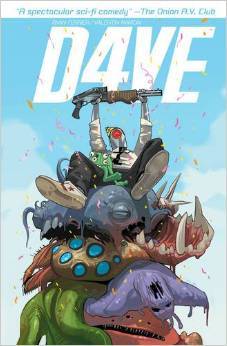 Primetime TV; mortgages; traffic jams. The robots conquered earth, wiping out all life in the galaxy, but nothing changed. Meet D4VE, the greatest robot war hero, now trapped behind a desk at a soul-sucking day job. Can something, somewhere snap him out of this slump? Will a new presence on 34RTH ignite his long-lost spark for battle?

The robots rose up and destroyed us...but were unable to escape the legacy of human thinking, so continue to exist in a simulacrum of late capitalism, where Bad Boys 5 has just been released, mild cursing runs to 'Jobsdamned' and 'William H Gates', and a robot husband haplessly claims the shop was out of oil despite it being the only thing they consume. D4VE was a war hero once; now he's a schlub with an office job he hates, an arsehole boss he hates, and a newly-ordered teenage son who doesn't respect him and is constantly wanking. Despite, as I may have mentioned, all of them being robots. But then, oh happy day, a time again comes when the robots need somebody to kick some ass while delivering improbable one-liners...

Not the answer you're looking for? Browse other questions tagged story-identification comics robots or ask your own question.

10
I'm looking for the title of a sci fi film about a killer robot
11
Looking for a short comic story about a robot trying to save a human pilot but bound by the 3 laws
10
Sci-fi horror comic book about a man who's brain was placed inside of a robot body to save him
7
Marvel comic with robot aliens and major superhero deaths
11
Looking for a short story about a robot that didn't want to die alone so he built another robot to keep him company until his “death”?
4
Young adult novel about a girl with a robot housekeeper on an Alien Planet