Cartoon: crocodile shaman teleports an Indian village into the future to a giant skyscraper roof

It's a very old cartoon series maybe from the 90s. The main characters are humanoid animals, who speak and act like people in a little Native American village.

In the past, a crocodile shaman brews his old family potion in a cauldron. Something goes wrong and the whole village is transported into the future to a skyscraper roof. The villagers looks like (buffaloes) foxes with typical Native American traits. There is a fat, ailing Chief who does not know about the whole thing and the others are trying to keep it a secret. There are the youngsters, maybe 2 boys and 1 girl. They have a Beaver neighbor, a typical lumberjack with axe and strong black coffee. And last the clumsy, forgetful crocodile shaman who is trying to prepare new potions to get them back into the past. He have many recipes hiden everywhere, but dont know what is the right one, so that always goes wrong. Any typical thing you can think of, one time it's hypnotize them, other times they switch bodies, get hallucinations, it multiplies them, etc.

The antagonist is maybe a wolf who wants to sell the old, abandoned skyscraper, but first he needs to get rid of them somehow.

Some parts i remember:

The crocodile shaman new potion can multiply people and the antagonist hypnotize the Beaver lumberjack and with his clones try to take over the village.

The Beaver give some coffee to the Chief and he dont like it.

The Chief want's to speak with their ancestors(great spirits) so ask the shaman to give him some potion. It's dont worked instead he is sleepwalking in the night. He use an outside evelator and see some construction workers working on the skyscraper. In the end he thinks that all just was a vision and thanked the shaman.

They where in some trouble, then the shaman find a leaf under his hat use it in the claudron potion and saving the day.

The cartoon you are looking for is La Dernière Réserve (2000) (The Last Reservation(2000)), which is apparently a French made cartoon.

When their medicine man, Storm Warning, mucks up the magic potion supposed to protect them from the forthcoming eclipse, the Indian A-choo tribe find themselves in the future, stranded on the roof of a skyscraper in the midst of a huge modern city...

Description from this link, which also has a video (the beginning of which is the opening of the cartoon in English). 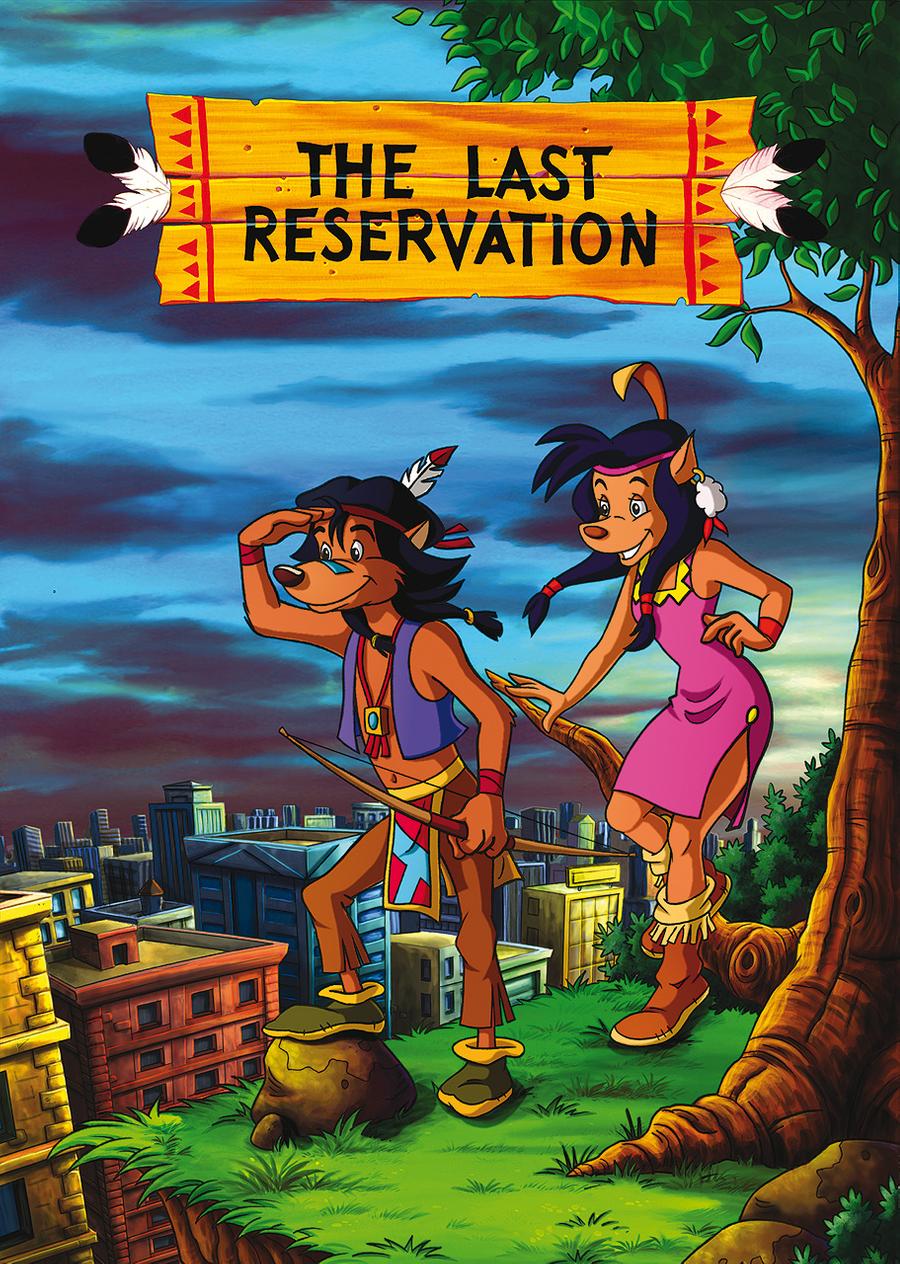 Image from this DeviantArt.

7
Alternate history story where Shakespeare accidentally stows away on a ship to America
10
YA fantasy about a young boy and a telepathic sword he encounters
12
Cartoon/anime about a giant robotic fish in the sky
9
Graphic novel from 2014 or later with a time traveling device
6
Cartoon: 4 kids transform into video game characters to save the world from a hacker and an evil program
5
Movie: in a big seaside city time travel portals open to the apocalyptic future with the fading sun and zombie mutants
2
Webcomic with a mermaid and a bird legged android?