Where does the huge black doorway from which Cthulhu emerges lead to?

In H. P. Lovecraft’s well-known tale “The Call of Cthulhu” the narrator (Francis Wayland Thurston) tells about strange facts that he has learned from the papers of his recently deceased grand-uncle, George Gammell Angell, and from personal investigation. Among these facts is the momentarily raising of a mighty stone city called R'lyeh from the sea-bottom of the Pacific Ocean due to an earthquake that came up on March 1st, 1925. In the tale it is also revealed that the Great Cthulhu is accidentally liberated by a band of sailors, and emerges from a monstrously carven portal; an immense black door with an ornate lintel, threshold, and jambs around it. I wonder where that huge black doorway from which Cthulhu emerges leads to.

I haven’t exhausted much in the Cthulhu mythos trying to answer my question but so far I have found nothing, thus, I believe that, in order to know where the h… the large door may leads, we have to try to find the answer inside the tale itself, starting with trying to decipher the enigma of the door. I say enigma because upon close examination of the door, the reader discovers that it is not any door but it has an abnormal geometry (non-Euclidian) that definitively violates the laws of our space and time. Here some descriptions of the door from which Cthulhu emerges:

…It was, Johansen said, like a great barn-door ... they could not decide whether it lay flat like a trap-door or slantwise like an outside cellar-door. ….Then Donovan felt over it delicately around the edge, pressing each point separately as he went. He climbed interminably along the grotesque stone moulding - that is, one would call it climbing if the thing was not after all horizontal - and the men wondered how any door in the universe could be so vast.

But, it is not only the door but the whole city of R’lyeh.

One could not be sure that the sea and the ground were horizontal, hence the relative position of everything else seemed phantasmally variable…... all the rules of matter and perspective seemed upset….. the geometry of the place was all wrong.

Therefore, one explanation of the nature of the door (and the city) is that they are contained inside a kind of curved space-time bubble, right? I said space-time and not only space because, according to the narration, Johansen experienced time dilation.

...From that time till his rescue on the 12th the man remembers little... 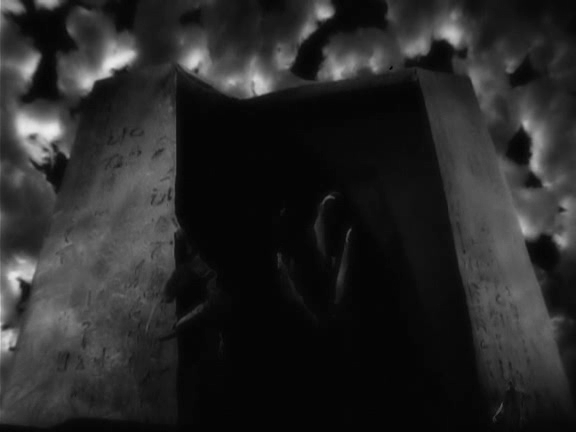 All Lovecraft indicated about what was beyond the door was encapsulated in:

(The word breaks are best guesses.) A translation of this has been passed down from earlier days:

In his house at R'lyeh dead Cthulhu waits dreaming.

And that's all we know. Beyond is Cthulhu's "house," whether this means his home or his tomb is unclear—if indeed Cthulhu's race (of which he is the lord on Earth and high priest) even distinguished between the two. As the Necronomicon says, "That is not dead which can eternal lie. And with strange aeons even death may die." Cthulhu's putative state of death is mere inactivity; his psyche still exists to some extent, and he can, when the stars are right, be resurrected.

More prosaically, we do not know whether the chamber or realm beyond the portal was purpose-built for Cthulhu's dead form, or whether it was also where he dwelt or held court in life. For that matter, given the large intrinsic curvature of the space around the city of R'lyeh (where a man can be lost into a mere angle of the masonry), it may not even be meaningful to talk about what lies "beyond" the doorway (or hatchway) at all; the space might loop back on itself, for all we know.

Not the answer you're looking for? Browse other questions tagged h-p-lovecraft the-call-of-cthulhu or ask your own question.

11
Where does Cthulhu slumber in “The Call of Cthulhu”?
10
How close does the Call of Cthulhu (2005 movie) stick to the novel?
10
How does a lich work in the Cthulhu Mythos?
16
Cthulhu Mythos: How does the cult recruit people, if at all?
8
The chronology and genealogy of Erich Zann
13
Why are reactions to Old Ones and other horrors so different in Lovecraft's works?
33
Was Lovecraft's “Shunned House” a real building?
11
How big is Miskatonic University?
3
Is there an intentional pun in this quote from the Necronomicon?
65
What are some examples of Lovecraft's racism in his published short stories?