Name of animated series with enemies being half brothers [duplicate]

I am looking for an animated series I watched when I was little, beginning of the 2000's. I think it was on one of the channels offered by Canal+ (French encrypted television channel).

It was a western-style animated series, in a post-apocalyptic setting. For all the following points, I am not sure if they are true or not, as I was quite young:

I am not sure anymore for any of this and every time I ask around, nobody knows about this series.

Possibly Chris Colorado, there seems to be a lot of similarities with what you have mentioned. 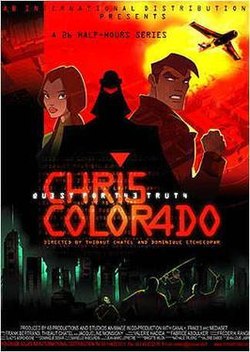 I watched when I was little, beginning of the 2000's. I think it was on one of the channels offered by Canal+

It was a western-style animated series, in a post-apocalyptic setting.

It was set after a meteor strike destroyed most of civilisation.

the hero is a badass guy that flies a red plane

he is recruited/asked/? by the city of the good people

Nope. But, there is a general type character who works for the bad guys and is very similar in appearance to the title character.

it is revealed later that they have the same mother, and are half-brothers

OK, I'm going to pass on this one. I know there was a weird connection between the title character's recently discovered half-sister and someone who defected to the evil side many years ago. So...maybe?

the king/chief/? of the evil people has orange or yellow eyes.

The main bad guy in this had a glowing red visor thing going on.

7
Looking for 1980s cartoon with robot champions duelling
3
Looking for a Story about Knights with magical powers fighting for their kingdom
1
Help identify Animated Fantasy TV Series
6
What is the name of this animated series?
9
2000's cartoon where a six-fingered pianist gets his extra finger(s?) removed for the girl he likes
20
Movie where some soldiers go into a bunker in a city because of dangerous conditions outside