I can't find a movie I used to see. It was about girl-machines who thought that they would go to the "happy place" when they finished their service. One of them meets a guy who tells her this isn't true. He takes her to a factory to show her that old machines are sent there instead of the "happy place". It turns out that old machines are actually being utilized to become food for new ones.

In 2144, Sonmi-451 is a "fabricant", a human cloned for slave labor, kept as a fast food server in a dystopian Neo Seoul. She is exposed to ideas of rebellion by another fabricant, Yoona-939. After Yoona is killed, Sonmi is rescued by rebel Commander Hae-Joo Chang, who exposes Sonmi to the banned writings of Aleksandr Solzhenitsyn and a film version of Cavendish's experience. Hae-Joo eventually introduces her to the leader of the rebel movement, and shows her that clones are recycled into food for other clones.

A couple of stills of Sonmi and Yoona from the movie: 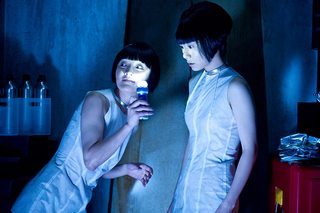 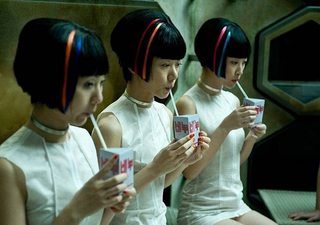 You can also see some scenes of Sonmi-451 in the extended trailer:

There's another glimpse of Sonmi and Chang at 2:37. (Thanks to InvisibleTrihedron for the pointer.)

6
Movie identification: Virtual reality future, polluted world, human mincer
6
Anime about a boy and a corrupt village
16
Dystopian novel from the late 80s: Michael and a girl living underground, escape to the surface
7
Searching For Horror Anthology Book Title
9
Looking for title of a fantasy fiction with huge war, invader on airship with warlock, island fortress with sorcerer, mnemonic storyteller and dragon
12
A short story about post nuclear war
7
Love story film - Trumpeter dies, falls in love in paradise, God smokes cigarettes, She is sent to Earth by God and Trumpeter wants to find her