Basically there are these high school students that study in a special high school. Apparently, they fight with pods that have controls to control a small robot that is used to fight. I don't know who they're fighting though. There's also this special move that they use that's called 'full drive or 'OverDrive'. The main protagonist is a boy named Ban.

I saw the anime on a TV channel a few times but never had the time to watch it and when I had the time, it already ended. 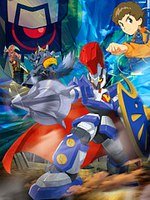 Danball Senki tells the story of a world where kids battle one another using little robot figures called LBX (Little Battler eXperience). Yamano Ban, a young boy who desires to become an LBX Fighter like his friends, is forbidden by his mother from owning an LBX as his father was taken from them in an accident relating to LBX years ago. One day a mysterious woman approaches Ban with a suitcase and tells him the hopes and fears of humanity lie inside it, and when Ban opens it, he finds a strange new LBX Robot. He is soon attacked by organizations who want the data inside this robot, and Ban and his friends are dragged into a corporation war that spreads all the way up to the highest political positions of power in Japan, and the true origins behind LBX Battling which could change the entire political structure of Japan.

This was given as a stub answer in Anime: Teens fighting with little robots in their hands who shoot round bullets, which I found with a Google search for anime kids school fight "small robots".

4
Anime: Teens fighting with little robots in their hands who shoot round bullets

6
Anime with boy who can see fighting mecha robots in parallel world
5
What is the name of the anime kids, mecha and fantasy series with a group of 4?
8
Anime short about two girls shooting each other with guns from their mouths
4
Anime with a ship in a sky and people with abilities/powers fighting
3
Book where kids at a boarding school bid on contracts to do certain chores, included humanoid robots
5
2000s anime/cartoon where they throw vials that hit a surface and summon beasts
3
Anime about a club of high school girls that fight monsters
1
Graphic manga about teenagers trained to fight in a war, using powers rather than guns
4
Animated TV show where a high schooler turns into a creature, and fights another student from his school with the same ability
4
Anime-identification: Boy summons or controls giant robot with a knife