Book: Choose Your Own Adventure, You Shrink to Enter a Human Body

I'm trying to find the name of a Choose Your Own Adventure book I recall reading when I was a kid (this was in the late '90s).

The protagonist is an adventurer, and you join a team of doctors/scientists who are shrunk in size to be able to enter a human body. You enter the body of a medical scientist who is in some kind of coma after an explosion (I think) in his lab. He had discovered the cure to a disease that is ravaging the planet, and you and your compatriots need to enter his body to repair the damage so he can wake up and tell you the cure to the disease. You and the others travel inside the body in some kind of microscopic craft/capsules that you can control. I think the craft are camouflaged to look like normal cells in the human body.

Along the way it turns out that one of the other scientists is a traitor who did the sabotage that caused the explosion.

This is Destination: Brain (Explorer #2) (1987) by Seth McEvoy. Not technically a CYOA, but similar in the sense that you select the route taken by the character.

You are the explorer. You journey to places no one has ever been and face dangers no one has ever known. Now you have a new assignment: Travel inside an injured scientist's brain to find the cure for a deadly plague. Up ahead the artery splits into two branches. You steer your capsule to the right. ""Stop,"" shouts Dr. Van Kamp. ""That's the way to the heart! We'll be smashed to bits!"" Do you trust him? The choice is up to you. 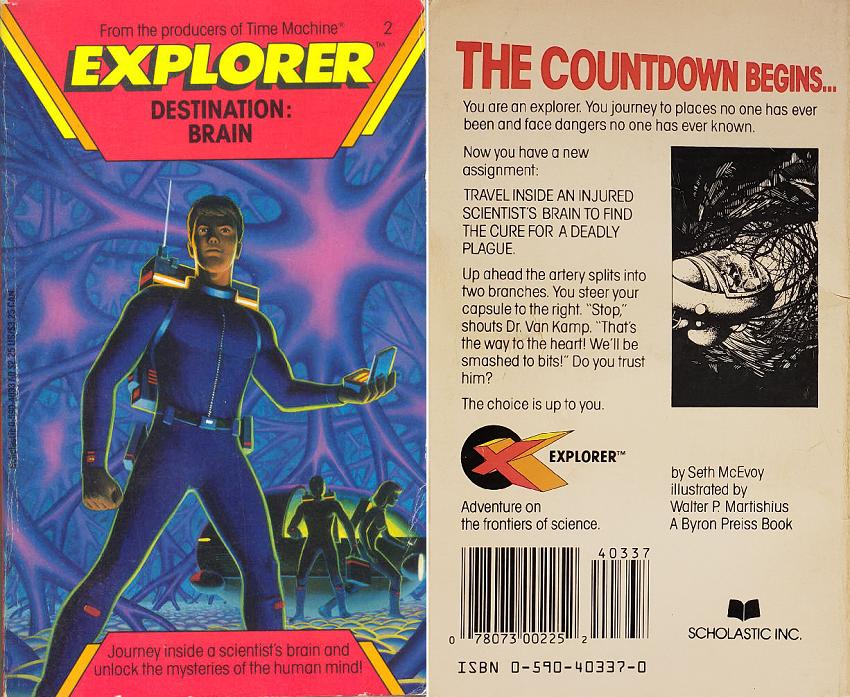 Not the answer you're looking for? Browse other questions tagged story-identification choose-your-own-adventure or ask your own question.