Story about a girl and colorful stones

My memory is very hazy but it’s a story about a girl and colorful stones. I read it with my daughter at least 15 years ago. It’s a “teen book”. Again - hazy memory but I think the cover is a coral color with the stones on it. I made a necklace for her with the same color stones to represent the book but I cannot remember if the actual necklace was part of the story or just the stones. I don’t know why this story is so important to us but I’m desperate to find it again. I cannot remember much about the actual story line at all.

If by "Coral", you mean Orange-y, I'd have to say, The Prophecy of the Stones. 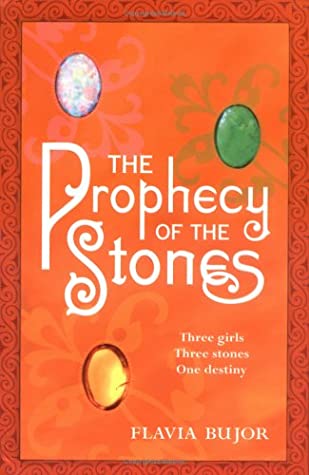 In a magical realm, three teenage girls--Jade, Opal, and Amber--are chosen to fulfill an ancient prophecy. On the day of their fourteenth birthdays, they set out on a quest that will require them to leave their homes and families face fierce enemies in a land called Fairytale, where magic reigns and evil is unknown. Although they meet as strangers, they must learn to trust one another with their lives as they embark on this epic journey, armed only with magical stones.

At the same time, in a parallel world, a young girl named Joa fights for her life in a hospital in Paris. While she is dreaming, she is transported to the magical realm where the three young heroines fight a spectacular battle. Their success or failure will determine the fate of Fairytale ...

At "Colorful Stones", I assumed it already, because well, on the cover, the stones are colored and are quite prominent!

The mention of a girl being plot-relevant, just made me even more sure, because 1 girl ties the whole plot together, Joa, who is connected to the other 3 protagonist girls.

The "coral cover" just cinched it for me, especially since I think I saw another person looking for this book on another site, and it's well known enough that someone else would likely be looking for it too.

The date of publication fits, too, but that's just icing on the cake.

Lastly, it is indeed is a sorta "teen book"... In that it was written by a preteen... marketed to minors, and has teenage protagonists?

10
An old book series about stones, teenagers, and parallel worlds
9
Book with male protagonist struggling against giant (possibly alien) bugs
1
70s-80s sci-fi collection with aliens and a girl werewolf who may have eaten cats
8
Book about missing sister, magical world in a chasm, and griffins
10
Fantasy book about an (orphan?) girl named Opal, involves gems or stones
6
Book about a girl who has purple eyes and wakes up in an airplane crash
3
Old book series about teenagers with dragon blood
14
Sci-fi short-story collection for young readers - from the early seventies