Was Geordi La Forge originally intended to be gay?

I've seen persistent Internet rumours that the character of Geordi La Forge was originally intended to be played as a gay man. Most of these seem to stem from a note on IMDB that states that;

In the original Next Generation script, Burton's character, Geordi LaForge, was going to be gay.

I've checked the earliest version of the script that I can find as well as looking at the original casting call and writer's guide description for his character, both of which mention his race and disability, but have nothing about his sexuality.

Is this just a case of citogenesis (and wishful thinking) or is there any actual proof that this is what Roddenberry, or anyone involved in the making of the show, had in mind for this character?

Geordi was not supposed to be gay, and Roddenberry did not plan to include gay characters until later.

I come to this conclusion because

It was not in "The Bible"

David Gerrold, who also happens to be gay, was a writer for TOS, and was brought to TNG to set up the foundation of the new series. He was heavily involved in creating "The Bible" - the Writer's and Director's Guide.

He also wrote a few articles for the "Starlog" magazine, giving us insights on how the Bible has been created: 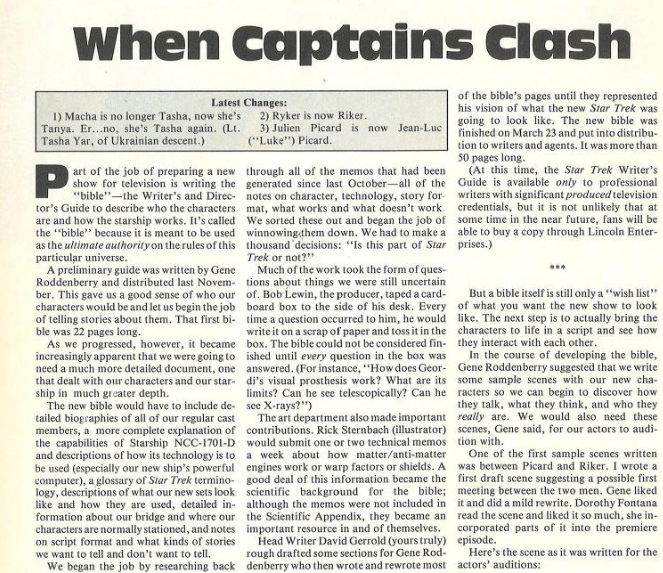 To sum it up, Roddenberry created an initial "bible", all writers contributed to it until Gerrold prepared it for Roddenberry, who finally rewrote most of it until the document was done.

Gerrold also gives us insights on the early drafts of LaForge, but other than his blindness, doesn't give us many details (If you are interested, here is the issue). His sexuality is not brought up.

Gerrold also specifically mentions that they want to avoid discrimination during casting, and that they don't want to have someone being gay just for the sake of being gay: 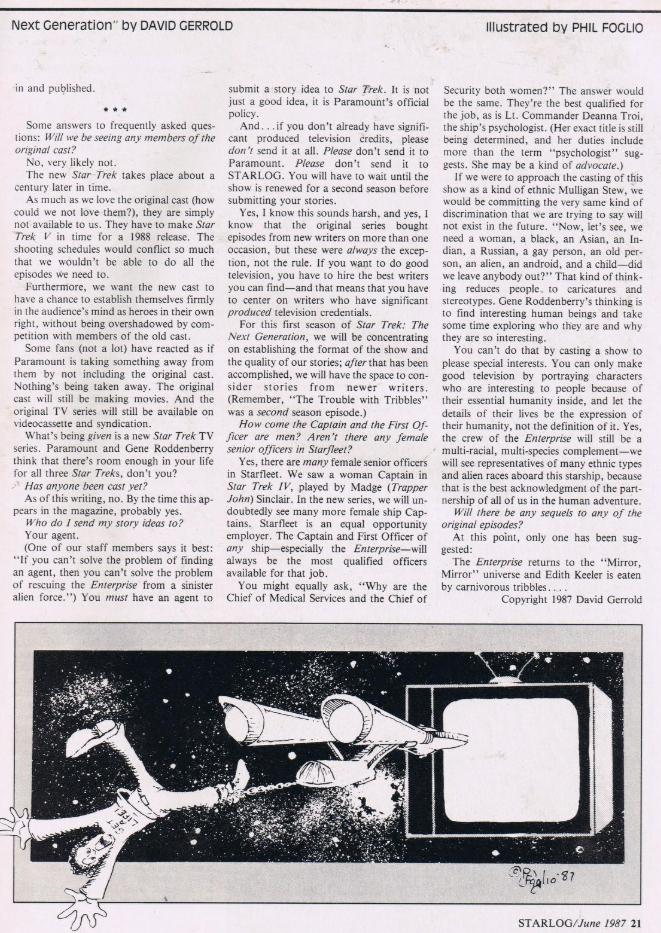 The relevant quote is:

If we were to approach the casting of this show as a kind of ethnic Mulligan Stew, we would be committing the very same kind of discrimination that we are trying to say will not exist in the future. "Now, let's see, we need a woman, a black, an Asian, an Indian, a Russian, a gay person, an alien, an android and a child - did we leave anybody out?" That's the kind of thinking that reduces people to caricatures and stereotypes. Gene Roddenberry's thinking is to find interesting human beings and take some time exploring who they are and why they are so interesting.

In the light of this statement, it would be at least odd to have Geordi being blind, black and gay at the same time.

Anyway, the final Bible does not contain any references towards Geordi's sexual preferences:

The same David Gerrold stated in an interview how Gene Roddenberry said that it was time to have gay people on the Enterprise:

So now Gene and I appeared at a Star Trek convention in November of 1986 and somebody asked “will there be gay people aboard the Enterprise?” And Gene – to give him credit for knowing the right thing to say at the right time – said “yes, it is time, we should show gay people on board the Enterprise.” This got a lot of applause. So then he repeated it in a staff meeting and balled out one of the producers and said “no, it’s time”

Because of this, Gerrold submitted a script that actually included gay characters, but he faced stiff opposition by other writers such as Rick Berman as well as Roddenberry's own lawyer:

So Gene’s lawyer sits on Gene’s face for a while – he was another homophobe – and said “you have to take the gay characters out.” And so I give half the lines to Tasha Yar, because if we still get the episode on the air, the point will still be made. And we go through rewrite after rewrite after rewrite and the script doesn’t get any better and I see what is going on and I don’t want to be trapped in an office where we have hypocrites running the place.
[...]
Rick Berman writes that we can’t do this episode and how we are on at 4PM in some markets and mommies are going to write letters. We get half the staff saying we shouldn’t do it and the other half – those who could recognize a good story – saying “this is a hell of a script, we got to do this and demonstrate we are the Star Trek that everybody’s been waiting for.”

Gerrold then let his contract expire and left.

And for the record, the story Gerrold submitted did not include a gay Geordi LaForge.

In 1991, it was announced that the next season (Season 5) would include gay and lesbian characters:

This season, gays and lesbians will appear unobtrusively aboard the Enterprise in the 24th Century. They weren't "outed," they won't be outcasts; apparently they'll be neither objects of pity nor melodramatic attention. Their sexual orientation will be a matter of indifference to the rest of the crew.

This article also mentions at no point that there have already been plans to have gay characters in TNG. Roddenberry died in 1991, and his plans to include gay and lesbian characters seemed to have died with him.

Not the answer you're looking for? Browse other questions tagged star-trek star-trek-tng sexuality or ask your own question.