Owls feature in many superstitions across the world. To the Greeks, the owl was emblematic of Athena, goddess of wisdom and war, and if an owl was sighted flying over the Greek army prior to battle it was considered an omen of victory. To the Romans, on the other hand, the owl was an unlucky creature that predicted death and disaster. In Britain there is a superstition that it is unlucky to see an owl by daylight, a superstition I had fun with in the first chapter of ‘Philosopher’s Stone’ where, of course, the sudden explosion of owls flying by daylight represented something very lucky indeed, though the Muggles did not know it.

My wizards' owls reflect their personality to a certain extent. Poor Ron gets Pigwidgeon, who is a Scops (these are very small owls with ears – cute, but distinctly unshowy). Poor exhausted Errol is a Great Gray, which in my opinion is the most comical-looking owl in the world – just Google the Great Gray to see what I mean. Naturally I gave my hero what I consider to be the most beautiful owl of the lot: the Snowy Owl, which also goes by the name of Ghost Owl. These are not native to Britain, so I felt that she would give Harry kudos at Hogwarts (there is no other snowy owl there, as I trust you have noticed). However, any owl expert would tell you that Hedwig is strangely atypical of her breed. Only after Philosopher’s Stone had been accepted for publication did I realise that Snowy Owls are diurnal. I think it was during the writing of ‘Chamber of Secrets’ that I discovered that Snowy Owls are also virtually silent, the females being even quieter than the males. So all of Hedwig's night-time jaunts and her many reproving hoots may be taken as signs of her great magical ability or my pitiful lack of research, whichever you prefer.

(Incidentally: there has been a spate of stories in the press recently concerning the upswing in popularity of keeping owls as pets, allegedly as a result of the Harry Potter books. If it is true that anybody has been influenced by my books to think that an owl would be happiest shut in a small cage and kept in a house, I would like to take this opportunity to say as forcefully as I can: please don’t.) 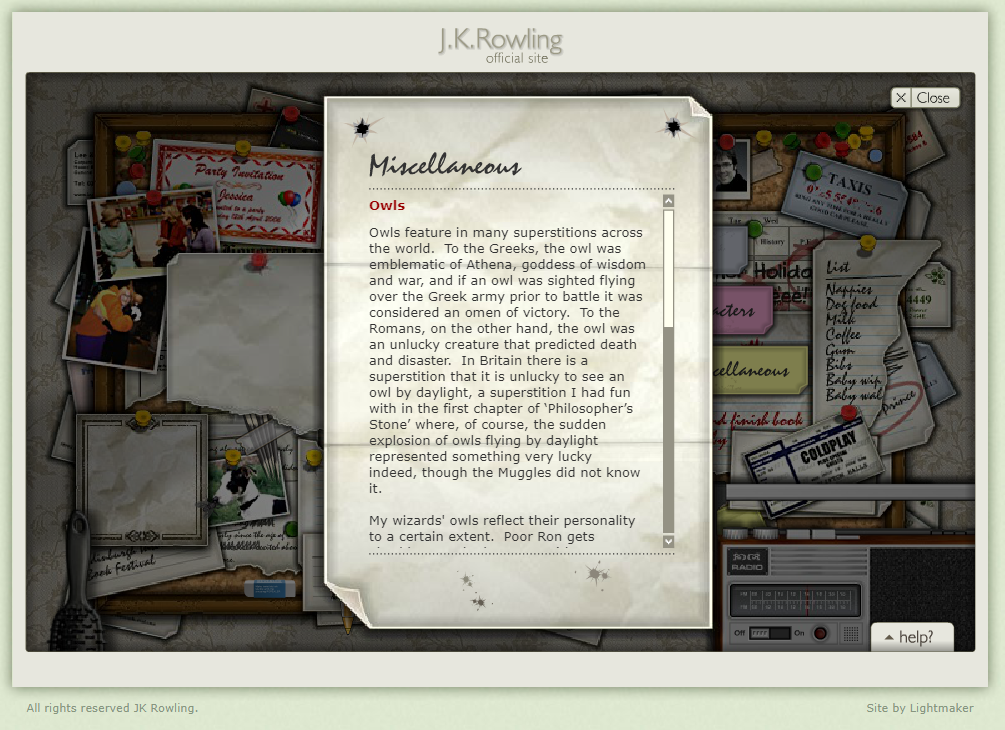 Looking through old forums shows that this post was replacing a previous post and provides some dating. It seems that the original was posted on January 31st 2005 and that it was replaced the next day on February 1st 2005.

I have been unable to locate the original version in full, but I have found two quotations from it.

If it is true that anybody has been influenced by my books to think that an owl would be happiest shut in a small cage and kept in a house, I would to take this opportunity to say as forcefully as I can: YOU ARE WRONG.

The owls in the Harry Potter books, which deliver the mail by magical means, were never intended to portray the true behaviour or preferences of real owls. If your owl-mania seeks concrete expression, why not sponsor an owl at a bird sanctuary where you can visit your owl and know that you have secured him or her a happy, healthy life?

However, the only contemporary sources I've seen for those quotations (1 ,2) present them as if they're two separate excerpts, and that the post itself was longer

It is worth noting that it seems like the original post was only about not keeping owls as pets, and so if it was longer, it probably wasn't more than a sentence or two longer.

This has been bothering me for some time, so I'll gladly award a 300 bounty to anyone who can provide the full text with sufficient proof. (e.g. A contemporary source that presents the original writing in its entirety as a single block quote)

I've not managed to prove beyond doubt that there was nothing in between those two quotes, but I think you've definitely got most, if not all of it, in your post.

In your second source - as in a few similar sources - there is an ellipsis between two parts, but they are usually missing the first sentence from your first source:

The owls in the Harry Potter books, which deliver the mail by magical means, were never intended to portray the true behaviour or preferences of real owls.

Here is a source from the time that presents the text you have as a single quote.

Other than that, I've found the following "meta discussions" about her change on the 1st Feb:

Oh wow, JKR updated the Owls section of the Extra Stuff page. Yesterday it just talked about how you shouldn't keep owls as pets, but now it has a whole lot of other info about Owls in it too. Cool! [Post link]

There is also an update in the extra stuff on owls!

I am happy to see the item about the owls. It's a very important message to get out. Glad to see she cares. (As if there was any doubt!)

The Owls entry has been updated. When I checked this morning it was merely saying that she's not in favor of the trend of keeping owls as pets and rather encouraged people to just sponsor bird sanctuaries if they wish to own owl pets. Now, there's the Athena connection and there's mention of Pig, Errol, and Hedwig.

I re-read the owl entry this morning. It indeed has more than was there last night. I especially found the information on Hedwig interesting.

I wonder why she took out the adoptive part though?

What "adoptive" part did JKR take out of the "owls" update? I didn't see both versions, only the new edited one.

Before the update, she said that owls did not make good pets, and she suggested that people who have become fond of owls because of the HP books should consider "adopting" an owl at a wildlife refuge or zoo, rather than try to get one as a pet. I think that's more or less the gist of it, I only read it once, and then it was updated.

on the first update about owls (on the extra stuff page)all it stated was about JKR being against owning owls as pets. Then she gave us further information about some of the owls in the books. And people keep saying that she took the other part out, she didn't you just have to scroll down, at least I can still see it.

[Same poster as previous] I just checked it again, and I was a tad bit wrong, it doesn't mention the adopting owls at a sanctuary, but it does say that she doesn't think anyone should keep them as pets

I wonder why she took it out though, maybe because she was afraid there would be a run on owl adopting? I can't see how that could be a bad thing?

I think she may have taken out the adopt-an-owl suggestion because someone pointed out to her that you can't, really. She'd said (I only read it once, so this is vague) something about visiting your adopted owl in a sanctuary, and I don't think that would be possible. Perhaps someone told her so, and she deleted it on that account.

Also, her original post, even the part about simply not having owls as pets, seemed to me much stronger than it is now. My suspicion is that she decided that the whole thing was a bit intemperate, and toned it way down, then added the information about the owls in HP to fill it up a bit.

I wonder if it was deliberate leaving that bit about adopting an owl up for such a short period. Long enough to encourage people into thinking about it, but short enough so that zoo's and animal sanctuary's don't get swamped with would be adopters. In other words, her original suggestion lives on in the forums and bulletin boards of her devoted fans and not the general public.

As an aside, it's really frustrating trying to find info about owls on long threads that reference Rowling and knowledge a lot >.<

Hope that gets you somewhere!

Edited to add - if you're able to see a way to view the comments on this HPANA post, that might have the original text copied by someone. It has the comment count, implying that the comments exist somewhere in the ether, but I couldn't find them.

11
What was the original version of this FAQ answer on JK Rowling's website?

37
What did Dudley hear when attacked by the Dementors?
9
What were the W.O.M.B.A.T questions on Rowling's old site?
14
Is it ever explained why Harry has to cage Hedwig when he travels?
31
How could Hermione have gotten more OWLs than classes?
5
What were the questions to Rowling's seven FAQ answers?
11
What was the original version of this FAQ answer on JK Rowling's website?
10
Which Death Eaters were named after J.K. Rowling's Friends?
2
At Hogwarts, why didn't many students own snowy owls?