Why did "A Stanley Kubrick Production" not draw a fine, while "Lucasfilm Ltd." did?

Both films have distribution company disclosure in the preludes to the opening credits; MGM for Kubrick's 2001: A Space Odyssey and 20th Century Fox for Lucas' Episode V: The Empire Strikes Back.

Both films reduce their opening credits to the production company while discarding the traditionally displayed director(s) and principal actors.

No other acting, directing, production, etc. credits are offered to the audience in either film until the closing credits. However, Lucas was fined in excess of a quarter million dollars because,

The Writers and Directors Guilds of America had no problem allowing it on Star Wars, back in 1977, because the writer-director credit (George Lucas) matched the company name. However, when Lucas did the same thing for the sequel, it became an issue because they viewed the company credit (Lucasfilm) as displaying Lucas' name at the start of the film, while the director and writers had theirs on the end. The guilds fined him over $250,000 and attempted to pull Empire out of theaters. The DGA also attacked Kershner; to protect his director, Lucas paid all the fines to the guilds. Due to the controversy, he left the Directors and Writers Guilds, and the Motion Picture Association.
source: The Empire Strikes Back - Filming

Stanley Kubrick was awarded 'Feature Film Finalist' in 1968 for his writing/director role in 2001: A Space Odyssey by the DGA and yes, 2001 was directed by Kubrick and ESB was directed by Irvin Kershner (not George Lucas) but that doesn't cover the WGAG fines for ESB and none for 2001 with regard to Arthur C. Clarke's considerable (and well publicised) writing contribution. 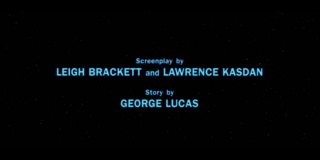 That's a lot of disparity between the treatment of two films albeit released 12 years apart. Why would the DGA/WGAW treat two films of a similar science fiction genre so differently?

A key reason* is that Kubrick was not displacing anyone else from appearing in the opening credits. Lucas's name appeared in the opening of Star Wars, in the form of a production studio credit. Since Lucas was also directing, there was no director whose name was missing, and with Lucas implicitly indicated as the creative force behind the production of the film, the Director's Guild ruled that since Lucas had a production credit at the beginning, he could waive having an opening directorial credit. This is just what Kubrick effectively did with 2001, taking a producer credit instead at the opening but not a director credit.**

However, with The Empire Strikes Back, having Lucas's name as the only one (apart from William Fox's) at the opening was felt to give a misleading impression. He was not the official producer or director, who normally get opening credits. What's more, the guilds felt that putting his name at the beginning, when his highest credit was for the story,*** also put him unfairly ahead of the screenwriters. That was probably a dubious charge, with WGA just piling on after the Directors' Guild had found a rules violation. Had Lucas credited Irvin Kershner and Gary Kurtz at the beginning of the film, the Directors' Guild would have had no problem, and the Writers' Guild would have let the matter lie; lots of films are released with the production company owner's name at the beginning but no opening screenwriting credit.

*This is to the extent that the difference was not just random luck. Another part of the answer is that everyone knew The Empire Strikes Back was going to be a blockbuster before it came out, and so interested parties were inclined to scrutinize it much more closely.

**Kubrick's credit at the beginning of 2001 is a credit for him personally as producer, which is slightly different from a production company credit. Before Walt Disney's death, his films were credited as, "A Walt Disney Production." After his passing, he was no longer actually producing the films, so the credit was changed to a studio credit: "Walt Disney Productions."

***Lucas is also credited as executive producer, immediately after the screenplay and story credits. In fact, he did more than enough work on the film to have qualified for a regular producer credit, but he opted to have Gary Kurtz credited as the sole producer.

31
What is the significance of the reversed colours of imperial and rebellion lasers compared to lightsabers?
17
Who wrote/directed what in A.I. (Artificial Intelligence)?
20
If Darth Vader discovered Luke was his son from the Emperor in the 2004 retconned version of “The Empire Strikes Back”, then how did the Emperor know?
43
Why did Stanley Kubrick include these scenes in 2001: A Space Odyssey?
25
Did "2001: A Space Odyssey" make any reference to the names of companies, or show any evidence of the existence of advertisements?