I think I got a copy of this about 5-6 years ago, although I'm not certain. Much like Diablo, you were running around an open area and fighting monsters, I think primarily with melee weapons. What was a bit different was that you were defending a village, and gathering resources for it at the same time, maybe also building buildings and designating people in specialist roles (blacksmiths, crafters, etc). You could pick from a variety of starting profiles (it kind of mixed races and classes from the traditional RPG setup so you could be an Elf or a Warrior or a Peasant) that gave you various perks. I have this vague recollection that it was not quite finished at the time I got a Steam key for it, and new features were still being added.

It was 3D graphics, I think, although I think it maintained something like an isometric angle looking down at the character. I remember that one of the annoying bits in the game was that it wasn't uncommon for enemies to be shooting at you from just outside of your viewpoint. I don't remember if there were other maps or dungeons to explore. The part I remember was kind of an open field with some trees, rocks, and bushes breaking things up. The enemies tended to stay in their sector, maybe unless they were raiding, and I think you may have been told how many of them were still alive in the sector, maybe with a generated name like "The Thorny Hold of Hobgoblins" although I might be channeling Dwarf Fortress there. The sectors did not have a physical border to them, no idea if they triggered anything in terms of loading. 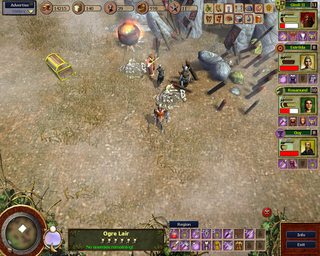 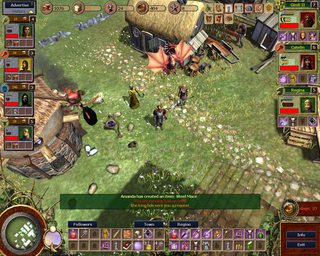 The goal is to establish and grow a village successfully in the wilderness of a fantasy kingdom, clearing out all nearby threats. The game is set in a world roughly based on the lore of both the Norse and the Celts and features characters and creatures of fantasy which inhabit the lands surrounding the village.

The player controls an adventurer acting as the leader of the settlement and is required both to defend it from attacks and to provide funding for its expansion. While the player's profession is chosen from among a number that specializes in combat, city management, or resource gathering, other non-player characters with more menial professions also periodically visit the village. These peasants and tradesmen can be persuaded to settle in the village if their requirements are met and a home is constructed for them (at the player's expense). Once resident, they can either perform their designated job function (e.g., growing food or smithing weapons), or be conscripted to join the player on expeditions into the unknown.

From an adventuring perspective, the player (and up to three followers drafted from the village) must clear out small zones of enemy resistance in order to claim these for the kingdom. Each zone is populated by fewer than a dozen enemies and is denoted with an icon indicating how difficult the zone is expected to be to conquer. Once a zone is cleared, the player gains access to any resources located within, and may also be rewarded with bonus treasure. The number of zones depends on the game length (size) selected when starting the game.

The primary challenge of the game is keeping the village safe while adventuring to find much needed resources for its expansion. Choices must also be made into how to allocate funds in terms of upgrading existing dwellings or adding new ones.

Searching for video game diablo esque city building put me on Games Like Diablo If You're Looking For Something Similar, which mentions Borderlands as being similar in the "advancement is as much about randomized loot as it is stat building" sense. The use of "lands" at the end sparked an association, so I searched Wikipedia's List of city-building video games, and Hinterland was one of the ones that jumped out at me.

Everything looked right, and a look through my Steam library found that I had logged a few dozen hours on the game, so it's a match.

Dungeon Keeper 2, which used to turn up in my Steam feed, but now appears to only be available on GoG.

A standard dungeon or level would look like this; 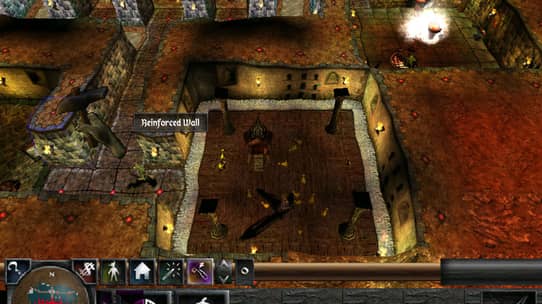 Dungeon Keeper let you tunnel out a city, building rooms of different types. Occasionally heroes or other Demons would turn up to attack you and you'd have to pull monsters you'd been using for magical research or construction and use them to beat up whoever was trying to break in.

Two similar games from Soldak Entertainment match some of this description. Both are essentially Diablo II clones with some more events in the town. It's been a while since I played them so my memories may be a bit fuzzy.

The first, Din's Curse includes random events in the town that are mainly attacks by monsters that you, as the hero, must return to fend off. The attacks have lasting consequences like killing off merchants or quest-givers.

The game world (the town and dungeons in which the events are occurring) is randomly generated before each new world level begins. Once into the world (which is essentially a town sitting on top of labyrinthine dungeon levels), the player must kill monsters and solve quests before the monsters begin to gather their forces to attack the town.

In the game, the player is required to explore randomly generated undergrounds of varying sizes and layouts, killing monsters and solving quests, while improving the character by gaining experience points and acquiring better equipment. The game world keeps on changing in the background, both according to and independently of the player's actions, resulting in events such as monster uprisings in the dungeons, sudden plagues, or invasions of the town.

There was an expansion, Demon War, increasing the player class options. There is also, a recently released (2019) Din's Legacy

The earlier published game is Depths of Peril and includes more town interaction. Also, the adventuring outside of town is mainly above-ground rather than dungeons/caves.

In the game, the protagonist is a faction leader in the barbarian city of Jorvik. The player's main goal is to protect the city from the rampaging hordes beyond the walls, and to become leader of Jorvik. There are other factions vying for control of Jorvik however, and depending on the player's actions they will either become friends, or hinder the protagonist's progress.

Each faction has a "guildhall" building that has a pillar-like object that must be defended. Other factions can attack yours with minions and you can attack theirs. If the pillar is destroyed, so is the faction.

A third similar game from the company (Kivi's Underworld) does not include town events.