Book with a "blob" monster from outer space

As a kid, I read a book with a blob-like creature. The creature lands on a farm and gets the cattle, farmer and then wife. It spreads and appears unstoppable. Somehow scientists find a way to use fumes to resurrect great scientists from the past to save the world. It seems to have been written in the 50's or 60's.

Giants From Eternity, a 1959 novel by Manly Wade Wellman 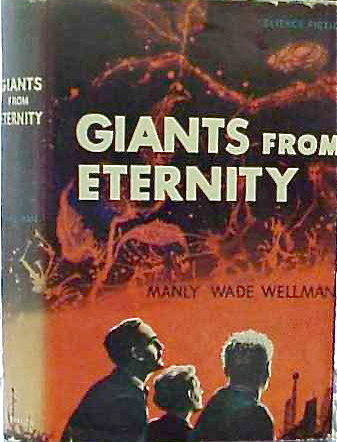 which was also the answer to the old question A red plant-like organism infects a farm. Part of this answer is copied from my answer to that question.

The following plot summary is from Frederik Pohl's review in If, September 1959 which is available at the Internet Archive:

It begins with a mysterious meteorite (or something) that falls on a farm and begins to eat everything in sight, turning what it eats scarlet and threatening to engorge the world. A couple of poisonously juvenile scientists investigate it. They are baffled and helpless, but they manage to extract a sort of resurrection-juice from it, which they use to bring back the greatest minds of all time to help them out. These are the "Giants from Eternity" and they include Thomas Edison, Isaac Newton, Louis Pasteur, Charles Darwin and Madame Curie. One of the juveniles is entrapped by the red stuff and thus works to help it spread; the revived Giants take a few days to master everything that has happened in science since their deaths, then quickly invent everything necessary to wipe out the red menace and bring about a happy ending.

Giants From Eternity was originally published (perhaps in a shorter form) in Startling Stories, July 1939, available at the Internet Archive. Since I don't have a copy of the 1959 book, the excerpts below are copied from the 1939 magazine version.

The [blob-like] creature lands on a farm and gets the cattle, farmer and then wife.

The trouble began with a meteor falling almost at the center of the United States, showing a moment's long streak of crimson fire in the June sky at sunset, too late to go hunting for it until the morrow. A farmer named Shanklin, living near Ingalls, thought the pond at the edge of his cow-lot glowed strangely red. But that was probably the last reflection of the sun's rays; nothing to do with the meteor. He did his chores, then tramped into the kitchen and began to read the Farmer's Almanac.

Mrs. Shanklin was slicing potatoes into a skillet. "Listen, Pa," she said suddenly, and the farmer, too, cocked a weather-beaten ear toward the gathering dusk outside the open back door.

"Sounded like a cow bawlin'," he mumbled, and turned to the poultry column.

"She's quit," remarked Mrs. Shanklin, and put the skillet on the stove. The savory crackle of frying possessed the room, and minutes passed. Then: "Listen, Pa!" she said again. "There's the other cow bawlin'."

A half-grown lad, sturdy and sun browned, hurried from the front of the house. "What, Pa?"

"Go down to the lot an' see what them cows is fussin' about."

The father rushed at his son, caught at the sticky-swathed shoulder. A moment later agony raced over his arm, and heavy wetness—not black, this close to his lantern, but as red as pain, slaughter, cruelty. It possessed his body in almost a trice, like a flash of electricity. He tried to yell again, but he was done for. He fell, and the surface of the blight received him.

"Did you call, Pa?" It was Mrs. Shanklin. Then she, too, saw. But she, being a woman, did not speak or struggle against the invader. She fainted. And the enemy rolled over her within minutes.

It was not until morning that the neighbors discovered this terrible newcomer to earth—the spawn of that meteor which had fallen into Shanklin's pond and then spread itself to swallow his animals, him, and all that was his. At dawn a great blotch of mussy, angry redness blanketed acres of his farm, like blood on a blotter. A rounded, gnawed-down hillock still showed where the house had been, a smaller and lower one marked the swallowed barn. The sole survivor of the evening's terror was Gruff, the collie, whining and cowering afar.

It spreads and appears unstoppable.

Brigades of notables hastened to Ingalls, first fascinated, then mystified, finally frightened. Hilbein, the farm agent, pointed out that nothing had inhibited the growth and motion of the blight, nothing had even hampered it for more than a little. At what point, then, would the growth ever cease?

Everybody echoed that question, and nobody could answer it.

Somehow scientists find a way to use fumes to resurrect great scientists from the past to save the world.

The first experiment with the resurrection gas is on a recently deceased colleague:

"Isn't that the gas derived from the blight-nucleus?" asked Caris, though she knew well enough that it was.

Norfleet made no answer, and she switched on the air-compressor. It began to hum and whir. Norfleet turned the cock of the cylinder and bent down to watch.

A rosy, woolly cloud of vapor crept slowly into the glassed-in space. It blanketed from view the battered, cindered remains of Spencer DuPogue.

The vapor was disappearing, disseminating. No, it did not disseminate, it was absorbing, somehow, into the limbs and torso of that black cadaver. Now it wasn't a black cadaver after all; it was Spencer DuPogue!

The resurrections are only temporary:

"The miracle will burn itself out. The restored flesh will perish—perhaps crumble into dust or vapor. Pasteur, having been brought to life first, will go first."

"When?" Norfleet asked, his heart gone cold. "When will this happen?"

"I cannot say certainly until I have observed further, made more accurate calculations; but Pasteur will go first. Then Darwin and Newton, within hours of each other. Then Edison. Finally I shall go." She smiled. "You mourn for us in advance, my young friend. Please do not. None of us feared death before, and now familiarity with death breeds contempt. All we want to do is help the world while we may."

23
Looking for two stories about a telekinetic boy
5
Blob out of ocean gets flamed on beach
8
Book with a kid who had a vanishing twin who stole his body
14
A red plant-like organism infects a farm
12
70's book, man wakes up from hibernation in a wasteland, participates in tournaments used by aliens to pick their slaves
4
Story about microscopic race that creates a minature woman probe
5
Anime about a boy with a weapon in his wrist
10
Sci-fi book series: escape from Earth , brain implants, engineer with stored fixes in his head
19
1970s or '80s movie where a family farm is relocated either in time, or to an alternate reality