Who is this old lady and is she some sort of cameo?

In Star Wars: The Rise of Skywalker I was wondering who this person is? She appears near the end of the film

I looked through quite a few of the 'cameos' websites/zines, but couldn't find anything. 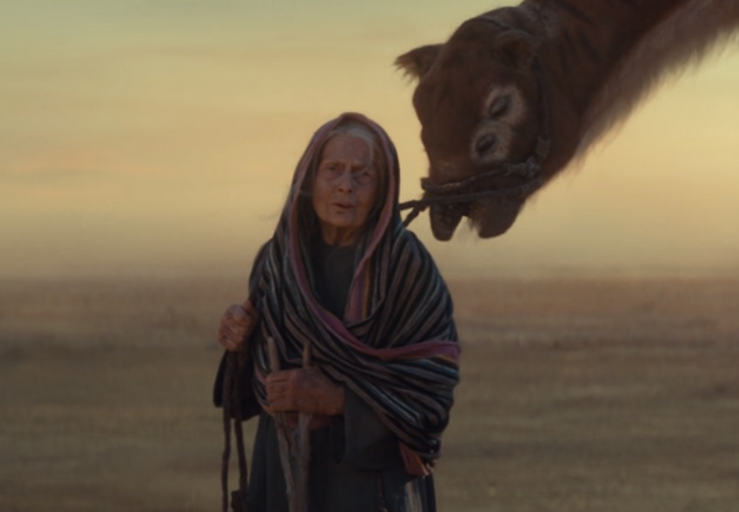 The lady in question is simply a resident of Tatooine. She doesn't get a character name in the credits (or any of the related media) and is just described in the official novelisation as

and in the end credits as

There's no good indication that she's a cameo. She was played by Ann Firbank who hasn't appeared in any previous Star Wars properties.

I actually think that this is a cameo appearance (well-known, established actor) rather than a bit part (aspiring actor, no supporting or lead roles).

Ann Firbank is a Royal Shakespeare Co veteran. She does have a (tenuous) connexion with Star Wars through her RSC colleagues Sebastian Shaw who played Anakin Skywalker and Ian McDiarmid who played Sheev Palpatine in Star Wars Episode VI.

45
Who is the guy in the gunner's seat of the Millennium Falcon near the end of The Rise of Skywalker?

14
Who is this blue skinned character?
23
Who were the hooded people in The Rise of Skywalker?
33
Who was Rey's grandmother?
13
What did C-3PO say in a foreign language?
4
Who is the fourth character in this rescue sequence during the Battle of Exegol?
8
When did they begin constructing this fleet?
11
What color is Rey's new lightsaber?
22
What happened to the Sith Star Destroyer that destroyed the planet Kijimi in 'The Rise of Skywalker'?
7
Why didn't Rey encounter Dark Side Rey inside the cave on the planet Ahch-To?