80s(?) sci-fi movie/TV show where a male character is sent through a factory conveyor belt process that will 'fix' them

I was watching TV in the 1990's in the UK which was showing either a movie or TV show.

I only remember that in the scene I saw that two characters, where at least one was male, had crashed, or were transported, to an alternative planet/dimension/time period.

In the scene they are 'captured' by a 'strong (Amazonian) woman' trope. They are then sent to the 'factory' here they are 'fixed' along with a large number of other 'natives'. I can't remember if that was mentally or physically. One of the captors leans in to the prisoners just before the process happens and says something like 'we won't actually do it to you, but you have to behave yourselves.'

The whole thing seemed very kitschy, and maybe quite dated. It could have been produced in the 80s, and it might have been in the same style as Barbarella and that kind of movies.

I have no real idea about anything else, as I saw this when I was quite young, maybe 5-10, which was also 20 years ago.

From the summary (emphasis mine).

The film takes place in a distant future where water is so scarce and rationed that it is considered an immensely valuable substance, both as a commodity and as a currency in ice cubes. The Templars of Mithra control the water and they destroy worlds that have natural water, leaving the galaxy virtually dry. Pirates dedicate their lives to raiding ships and looting the ice from the cargo holds to make a living.

Jason is the leader of a band of pirates that raid a Templar cruiser for its ice, and discover the beautiful princess Karina in a stasis pod. He decides to kidnap her, waking her up, and alarming the Templars. Jason and his pirates flee, but are pursued by Templar ships. Jason lets some of his crew, Maida and Zeno, escape while Roscoe stays to help Jason. Both Jason and Roscoe are captured.

During their capture, they meet Killjoy, who has been pretending to be a monk to avoid slavery. Jason and Roscoe are sentenced to become slaves, a process which includes castration. Roscoe and Jason are spared this fate by the spoiled princess, who has taken an interest in them. Princess Karina purchases them as her slaves, to work as servants during her party. That evening, they are reunited with Killjoy (disguised as a robot). Jason, Karina, Roscoe, Killjoy and Nanny manage to leave the planet before the Supreme Commander arrives to arrest her. 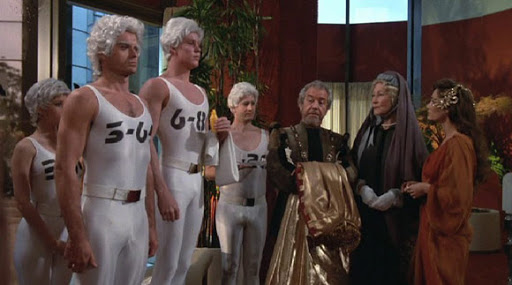 9
1980s film involving humanoid aliens crash-landed on Earth
10
Late 80s sci-fi movie scene: woman morphs into machine/battle station
8
Looking for a fantasy novel where a ring of fire races across an alternative world
59
Movie about a boy, two men, a robot and a war
4
80's sci-fi B movie where an alien, disguised as a human, crash lands in a desert
4
90s (or earlier) film or TV show that featured a prison ship whose inmates believed Superman would liberate them
5
Movie about a family thrown into a fantasy world