The programme in question was on maybe bbc 1 or Sky 1 around 1999/2000 and I remember watching The Adventures of Dodo and Conan the Adventurer (both cartoons) before.

The show was a 2 or 3 part series and was live action fantasy.
All I can remember is that the main character was a young girl and I think she wakes up in a strange fantasy place and she is greeted by some big muppet like monster I think. She’s scared of them and ends up in their village which I think has been attacked by something evil, so it turns out they aren’t the bad guys. Then she goes on a quest with them.

Another scene I remember is she is with her travelling companions and I think in the story the girl's mother is dead. Anyhow in this scene she is in something like a version of her reality, in her house. It's night and she is tiny; she sees her mother there asleep in bed and tries to call out to her but it's no use. And they carry on through to the next part of their quest.

The show you're thinking of might be The 10th Kingdom, starring Kimberley Williams as Virginia. She gets transported from New York City to a fairy tale kingdom via a magic mirror. 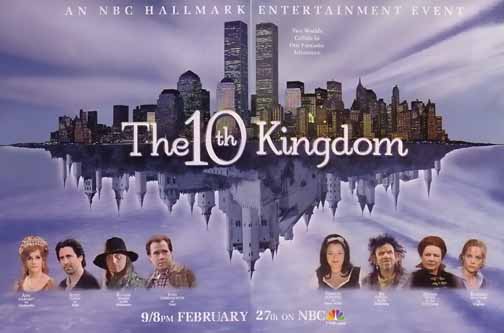 I came across this question while trying to remember this show myself. I also checked the Wikipedia list of Sky One programmes but managed to miss it as it was the first one on the list!

10
Trying to recall the name of a young adult dystopian fantasy novel from late 90s / early 00s
6
Fantasy book about girl with hair that made people get crazy
9
Young Adult Story about girl with electric powers
12
90s fantasy novel about a girl on quest with talking pig (I think)
5
Identify this TV show from early 2000s with aliens, implants, and an alien-human hybrid
9
Horror movie which takes place in an old house with a girl with powers.
8
Fantasy book from the mid-late 90s about a princess with a sun brand on her hand
7
Child Fantasy book about a girl with special powers inherited from her mother