Short story(-ies?) set in a world where energy is stored in animal-loaded springs, cultures controlled by big companies

I am looking for a short story, or a few short stories connected with each other.

I read them around 2012-2015, but they likely were published before. It was in a paper book, possibly a short-stories collection, but I don't remember the cover. I read them in French, but am pretty sure the original author is american.

The elements I recall regarding the general universe are:

In the same "world" (I think in China), is another protagonist, but I don't think he interacts with the American ones:

Since in my memory the protagonists do not interact, I almost sure there are at least two short stories.

This sounds like "The Calorie Man" (2005) by Paolo Bacigalupi.

The story opens with the protagonist, Lalji, visiting a kinetic shop; there he collects his springs, recharged by the labours of designed, degenerate beasts known as mulies. Calories have been converted to joules, and now the springs are tightly wound, ready to power his riverboat's engines for another few miles of travel.

The reason for Lalji's journey is to make a strike back at the men in control. He goes upriver to find a man, a calorie man, who may be just another generipper--one of those responsible for the state of things; 'generippers make monoculture', Lalji notes bitterly--or who may be able to help.

If you read it in a collection of similar stories, it was probably Pump Six and Other Stories 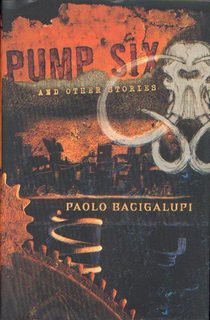 (I read this when it came out and the story "The People of Sand and Slag" still bothers me.)

11
Sci-Fi Golden Age, aliens who see X-rays
13
Duo of alien xenologists study couple of Terran explorers, later save them
27
Short story: If 1+2=3, then 2+3=4, obviously
7
Short story on an alien world where the most dangerous flora/fauna are the most attractive
13
Novelette: long lost Gypsy homeland returns but then an American city vanishes
4
Dark sci-fi short story about a designer drug/pharma industry in a near future
23
Short sci-fi story of scientists testing an upscaled generator in a place that is 'nowhere' (reached by portal)