What was the population of Los Angeles in "Blade Runner 2049"?

In Blade Runner (set in 2019), Deckard mentioned that Los Angeles had 106 million inhabitants.

Was the population of Los Angeles ever mentioned in Blade Runner 2049 and if not, is an estimation possible?

There are no mentions of the population of Los Angeles (or any of the other Megalopolis'), and my suspicion was that it was left vague intentionally by the writers.

Denis Villeneuve (the Director of this movie), has stated in interviews:

"Part of L.A. is in ruins and doesn’t have power anymore, and there are a lot of refugees coming from eastern Asia and Russia,” Villeneuve says. “To have your own apartment is a big luxury, and there are a lot of people living in boxes.”
-Los Angeles Times, 2017-09-01, Denis Villeneuve explains how 'Blade Runner 2049' is no replicant of the original neo-noir sci-fi fan favorite, by Josh Rottenberg
...
"In this world, there’re no more countries, only a few megapolises — Los Angeles, maybe New York, maybe London, maybe Ouagadougou — that survived because they were built around spaceports."
-Time.com, 2017-10-03, Director Denis Villeneuve Proved to Us He Loves Blade Runner More Than Anybody, by Nash Jenkins

Additionally, I have been in contact with one of the screenwriters of Blade Runner 2049 and have confirmed with him via Twitter. Michael Green writes:

More than there should be, none thriving. 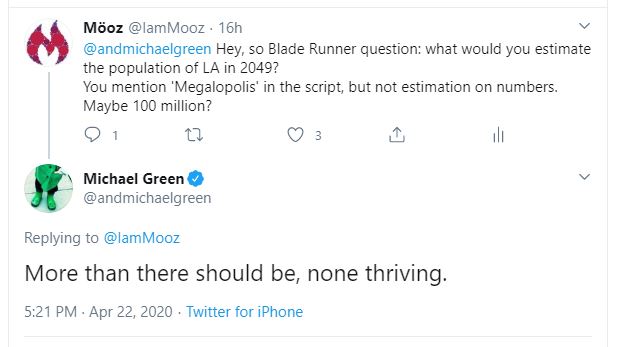 Green and Hampton Fancher (the Story writer and other screenwriter) write in the script:

EXT. SKIES ABOVE LOS ANGELES. NIGHT.
LIGHTNING shatters the sky into irregular jigsaw shapes. Indeed, there is a storm collecting to the north. We are...
SOARING OVER
The breathtaking cityscape skyline of dystopian grime. 30
years older. Sweatier. Sucked of oxygen. If LA then was a
giant oil refinery then, now it is industrial bones jutting
out of a new city built atop the old. And spread far as the
eye can see. What were streets are canyons that cut deep
down to the strata below. Who knows how far.
-Blade Runner 2049, Final Shooting Script, Fancher, H. and Green, M. 2017.

This fits the whole motif of 'we don't want to give too much away, just leave it to your imagination'.

9
What has happened to these cities in Blade Runner?