Short "Star Wars" comic where Luke and Leia encounter an alien in deep space, who defeats a Star Destoyer with antimatter blobs

I remember this from some thin comic from the 80s, possibly before The Empire Strikes Back came out.

The artstyle was European-ish (Adamov? Moebius?) and the subject was Luke and Leia (both inexplicably in still in their A New Hope outfits; do princesses ever change out of their ambassadorial gowns? do sand peasants change their keikogi?) on a Tantive-IV style ship encounter a wandering alien's vessel in deep space (actually this should not be that surprising in the Star Wars universe).

They are taken aboard. A pursuing Star Destroyer looking for aggro and considering everything not Imperial as something that needs to be destroyed engages in pointless hostilities and is removed immediately by the alien using antimatter blobs. Luke and Leia are sent back to their ship, and the alien departs, Galactica-style. The End!

The cover of the comic shows Luke in his "Farmboy" outfit and Leia in her "Ambassador" gown and hair-buns. They look remarkably unlike either Hamill or Fisher on the cover, but that's how comics go sometimes.

There's a space-based alien/organic vessel called "Ship" who uses antimatter as its primary weapon and obliterates both an Imperial Star Destroyer and several TIE fighters. "Ship" takes Luke and Leia's ship inside itself and later departs into the unknown at the end of the comic after destroying the ISD and TIEs. 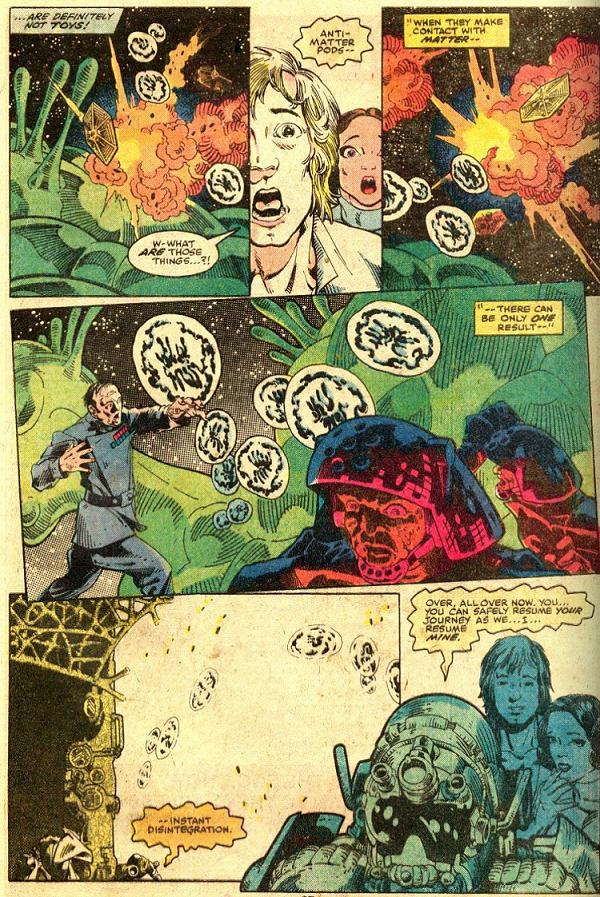 They don't, however, use a CR90 Corvette (the Tantive IV-style ship), but that seems to be the only discrepancy between your description and the comic itself.

Not the answer you're looking for? Browse other questions tagged star-wars comics episode-identification or ask your own question.

3
A brief explanation on who the separatists in the Star Wars prequels are and their relations with the Empire?
30
Looking for a Star Wars comic where Han carries Leia on his shoulders?
14
Novel from Star Wars universe where Leia fights Darth Vader and drops him off a cliff
10
Superman comic book with an alien villain who was frozen and dumped in deep space, rather than being executed
7
Looking for a Star Wars comic where a Jedi in hiding encounters Vader who coerces him to join the Dark Side by threatening civilians