What does the inscription on Wonder Woman's shield mean?

Recently, I noticed that the DCEU's Wonder Woman's shield has some sort of inscription around the edges. 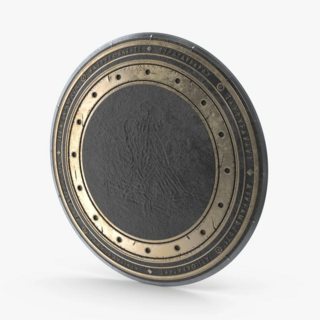 From the best image that I could find, these inscriptions look like Greek to me. 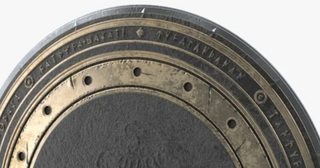 So, what does this inscription mean?

Dr. Vincent Tomasso, Asst. Professor of Classics at Trinity College, Hartford, has kindly transliterated the text on the shield into Greek text (or rather the closest available letters in variants of Ancient Greek).

The inscription reads (from upper left-hand side, reading left to right)

In ancient Greek, which is what Nerdist wanted me to translate, they’re meaningless.

Post #24: It’s All Greek to Her: the Inscriptions on Wonder Woman’s Equipment in ‘Batman v Superman: Dawn of Justice’

The variant on WW’s sword appears in inscriptions from Attica and Argos in mainland Greece to the islands of Naxos and Ceos.

but with some odd additional letters that seem to be closer to runic script and some other crap just thrown in.

The inscription on the sword (in similar text) reads

is supposedly part of a quote from Joseph Cambell's Goddesses: Mysteries of the Feminine Divine

“Originally Artemis herself was a deer, and she is the goddess who kills deer; the two are dual aspects of the same being. Life is killing life all the time, and so the goddess kills herself in the sacrifice of her own animal. Each life is its own death, and he who kills you is somehow a messenger of destiny that was yours from the start.”

Not the answer you're looking for? Browse other questions tagged dc dc-extended-universe wonder-woman-2017 or ask your own question.

3
What powers Wonder Woman's invisible plane?
10
Batman v Superman: Wonder Woman at Lex's Party
16
Does Wonder Woman ever get cold?
5
Are there any stars at all on Wonder Woman's costume (or other Themysceriana) in the 2017 film?
21
Is Zeus alive in the new DC film continuity?
12
Did this character die in the 2017 Wonder Woman movie?
6
What was the artifact Etta is looking for in the epilogue of Wonder Woman?
5
In DC Comics, are the Atlanteans of Greek descent?
5
Is Superman more powerful than the Greek gods?
2
What are the different coloured forces in "The Flash" (2014)...?