Fantasy book: king's fool bound to him by magic, captive girl is secretly the fool's sister

I read this book about 30 years ago. But I cannot remember the author, book title, nor even the characters' names.

It is a mission to rescue a girl, I think of royal blood of a conquered kingdom. She is held captive to a king. It turns out that the king has secretly fallen in love with her, but cannot reveal this to anyone, as it would expose her to murder. The king never shows his feelings, but the king's fool is bound to him by magic, and it is he whose responses reflect the king's true emotions. The magic has rendered the fool unrecognisable.

The fool is also, without the young woman knowing it, her brother. There is a scene where the young woman dives in a life threatening attempt to retrieve a ring that will embed the king's power as ruler. She almost dies in the attempt, and is down in the depths for a very long time. When she surfaces, the king stands stoic and unresponsive, while the fool gasps and drops to his knees in anguished relief.

The storyline includes a prophetic element, that when 3 people together, see a particular fantasy creature, it means each of them will have different future fortunes. One, tremendous great fortune, one will have ... um, I can't remember, perhaps something to do with love, and one will die. There is no way of knowing who will experience which outcome.

The book ends with the mission successfully accomplished, and as the three heroes ride around a bend, they see this creature. To my mind, best ending ever.

So many elements of this match up with Guy Gavriel Kay's 1990 novel Tigana that I'm convinced it's what you're looking for. You've just misremembered a few things; I think you've combined two characters.

The following is pretty much all spoiler, so I'll preface with the thought that it all fits if you conflate the characters Baerd and Alessan. 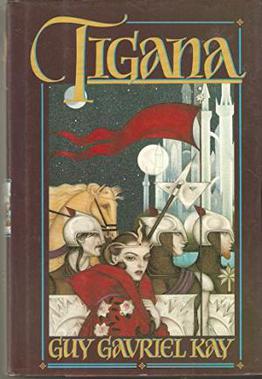 Tigana is set in the Palm, a collection of small states that have been conquered from either side by sorcerors from empires bigger than them -- Brandin from Ygrath in the West and Alberic from Barbadior in the east. One of the small states, Tigana, is under especially brutal treatment, because Brandin's son Stevan was killed during its conquest. Tigana is under a spell that suppresses all memory of the place's existence, a kind of slow genocide.

There is no "princess" but there is an analogue: Dianora, daughter of one of the Prince of Tigana's councillors. She and her little brother Baerd spend years after the conquest in poverty and oppression in Tigana (renamed "Lower Corte"), and in their isolation, there is a great bond between them.

But Baerd grows up. After Baerd is beaten badly during a run-in with Brandin's soldiers, Dianora and Baerd become lovers. Baerd is so ashamed by this that he runs away and meets up with the only remaining royal, Alessan, prince of Tigana.

Much of the novel deals with Alessan's wanderings, from various viewpoints, with Allesan gathering allies and sowing the ground for overthrowing both wizards at once (if only one was overthrown, the other would easily conquer the rest).

Dianora, resolving to kill King Brandin, slips away and works her way up to be one of Brandin's concubines. Now she's Brandin's favorite but for some reason keeps putting off her assassination attempt. She even foils a different attempt, at which time the assassin (from Brandin's home kingdom) invokes Brandin's dead son.

This is where the Fool reflecting the King's emotion comes in. While Brandin stands there emotionlessly, the Fool (called "Rukh") rages and beats the assassin to a bloody pulp, continuing long after he's dead.

After this, Brandin decides to marry Dianora, abandon his old kingdom and just be king of his part of the Palm. She is torn about this, but sees the riselka that is the subject of the folk rhyme you've labeled a "prophecy".

One woman sees a riselka: her path comes clear to her.

This causes her to attempt the "marrying the sea" ritual (see also this) you mention: Brandin throws a ring into the sea, and Dianora dives into the sea to find it. She intends this as a form of suicide, an omen to bring Brandin down, but her conflicted feelings cause her to succeed!

And just as you say, when Dianora surfaces with the ring, the Fool gasps and drops to his knees in anguished relief.

So, a lot more things happen in the novel, but in the climactic battle, we finally get the Fool's viewpoint:

Brandin, needing the last measure of his magic to defeat Alberic, releases the spell binding Tigana and the Fool, who is actually the former ruler of Tigana, prince Valentin, Alessan's father! As he regains his will, he takes his sword (Bradin had him always carry it as a further humiliation) and slays Brandin.

The final paragraph clinches this identification:

Three of the characters (Baerd, Devin, and Duke Sandre) round a bend

And it is there that they see the riselka, three men see a riselka, sitting on a rock beside the sunlit path, her long sea-green hair blowing back in the freshening breeze.

I found myself furiously leafing back to find the folk rhyme, which says:

Three men see a riselka: One is blessed, one forks, one shall die.

11
What was the name of the fantasy book about a young woman with multiple colored hair that and that can change into a calico cat?
8
YA book about a human girl who saves an cat-like elf guy, deals with racism and magic and a prophecy
3
A fantasy book about a woman who can speak with animals and is taken by the prince?
5
Fantasy book series, a young boy finds a book which contains a passage in it that when read gives him like magical powers
10
Fantasy book from 2000s girl with amnesia, hideously ugly face wears mask works as kitchen maid
6
Young Adult Fantasy book where some people, like the female protagonist with super strength, are called a special name with their special powers
13
Fantasy/magic book with female protagonist and a misogynistic villain in a ringed city
8
Fantasy book from the mid-late 90s about a princess with a sun brand on her hand
9
A short book about a woman who helps defeat aliens that she had herself engineered in the future