I was watching a video that commented on the use of sound in horror games, including Perception, a game where you play a blind woman who has to navigate her way around a house using echolocation to reveal her environment. It reminded me of another PC game I played, maybe ten years ago (around 2010) which used the same gimmick, except you were playing a naturally blind creature in an alien environment. I think I played the tech demo for it, but never bought the full game. It was a 3D first-person survival/exploration game where you had little to no offensive capability, instead focusing on distracting and avoiding larger predator creatures while not cuing them into your presence by making noise through over-using echolocation. I remember that the echolocation effect involved a circle (several concentric circles?) that emitted from your character's location and then outlined along objects in the environment. I'm not certain if it was monochromatic (reflecting a lack of vision) or colorful (with said color being used to indicate some additional information from the echolocation like maybe different materials). I can see it both ways in my head.

I did a bit more searching, with varied terms, and I think I found it, Pulse by Pixel Pi Games, which debuted on Kickstarter on March 7, 2013, and was released around October 20th, 2015.

Pulse is a first person adventure game that takes place in an unseen world revealed only by sound.

Journey as Eva, a young girl who was lost her sight at an early age, and has since developed the unique capability to see the world around her through sound. Explore a world on the edge of collapse and discover the long-kept secrets of the land...

I was wrong about the main character being alien, although they team up with some marshmallowy alien creatures.

The search terms that got me there were video game creature echolocation -perception, a few pages in.

It was definitely more on the colorful side: 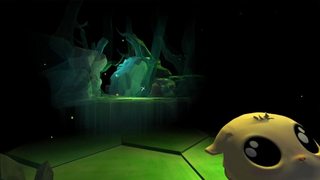 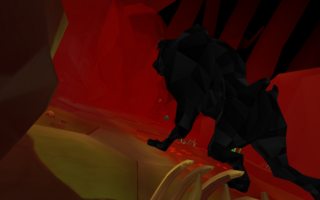