Magical enhancements that work by taking attributes from other people [duplicate]

I recall reading a book a long time ago which had an interesting concept of magic. Essentially, magic created superhumans by taking the attributes of one person and giving them to another. So, for example, the king had three or four people bound to him magically, each of whom had no physical strength whatsoever because they were giving it to the king. I specifically remember a moment where the newly-coronated king meets the people who had given their mental capacity to his father - the "King's Wits" they were called.

But I can't for the life of me remember what the book(s) were called. I only read the second or third one in a series, and it was ten or fifteen years ago. I recall the cover art included some big non-human creatures with oversized noses. I thought the magic system was interesting, and figured I might like to re-read the book(s). Anybody know what I'm talking about?

This is certainly Runelords by David Farland.

In the universe of The Runelords, there exists a unique magical system which relies on the existence of distinct bodily attributes, such as brawn, grace, and wit. These attributes can be transferred from one individual (or animal) to another in a process known as "giving an endowment". Lords who have taken many endowments become extremely powerful, almost superhuman, and are known as Runelords.

The original novel was published in 1998, and the whole series runs to 9 books and a couple of short stories.

Thanks to @Kitkat who supplied this quote from book 2; The Brotherhood of the Wold

These seven men were the King's Wits, men who had endowed King Mendellas Draken Orden himself with the use of their minds, letting their skulls become vessels for another man's memories. Though the King had died, fragments of his thoughts and recollections lived on in each of these Restored men. In days to come these men would probably become valued counselors to the new King. 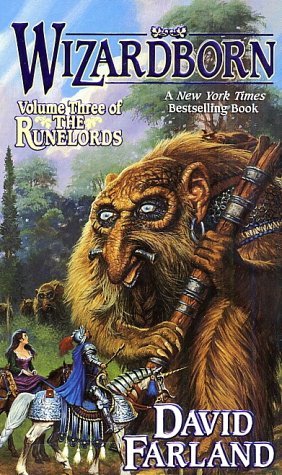 I think the cover image you remember is from book three, Wizardborn. Though I can't for the life of me recall what this creature is supposed to be.

10
Book about a planet where DNA swapping between animals humans and metal eating microbes published in 1995 or earlier
5
Man expelled from matriarchal squad, lives with one other woman, discovers an alien species
2
A novel about people that can affect others through reading
12
'The talking head' fantasy book with a girl on a quest with a severed head and a sassy crow
6
Title of a book with a girl found under a tree with eyes sewn shut
17
Looking for the name of a Fantasy book where magic ability determines royalty
10
Old book about a land surrounded by a thick fog wall where people are exiled to the other side
12
A story about the world split into three realms
21
Fantasy book: king's fool bound to him by magic, captive girl is secretly the fool's sister