You would think that a fantasy novel with a main character who is a mall security guard would be easier for me to find. Due to another question I answered recently, I wound up on the TV Tropes page for Dead Man's Switch, and it made me suddenly remember a paperback novel I read in the mid 1990s in Ashland, KY. The plot of the novel had a night watchman at a mall somehow getting involved with the supernatural. What's making things difficult is that the details that are sticking in my mind are the non-supernatural ones. What I do remember:

story-identification novel elves
Share
Improve this question
asked May 2, 2020 at 14:27 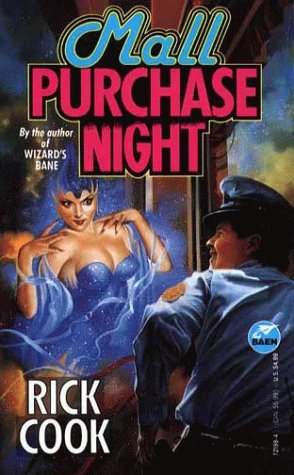 When Andy Westin became a security guard at Black Oak Mall he had no idea what he was getting into. This particular mall is built on an elven power source—the actual gateway between Elfland and Earth. This has made it a place of conflict between some very heavy elven hitters. The good guys are merely ruthless. The bad guys are evil incarnate. On the eve before May Day, the conflict threatens to boil over. And all that stands between thousands of shoppers and the worst Faery has to offer is one bemused security guard. That is, if the elven princess doesn’t get him first!

The bomber is a character known as The Preacher:

The Preacher took his time, working carefully and stopping often to check his work. Batteries from the flashlight under the drivers seat, copper wire left over from a long-ago house wiring job, a purple gym bag tucked away in a corner that he could barely stand to look at, the things nestled in foam in the specially constructed metal box in the glove compartment and finally the brake lever off a child’s bicycle. The Preacher's hand shook and his eyes filled with tears as he remembered his casual promise to take it by the shop and fix it as good as new – and how the promise became moot before he could ever keep it. But the Lord was with him and the Lord made him strong.

You've misremembered the scene slightly. Andy is suspicious because the man looks too relaxed:

"Uh-huh," Andy mumbled. It wasn’t that the old man was tense, he realized, it was exactly the opposite. He seemed utterly relaxed, as if he was completely at peace with himself. With a chill Andy realized where he had seen that kind of calm before. Someone who’d been under a lot of stress and had made a decision that simplified their lives. Some criminals were like that after they confessed. So were some jumpers – the ones you couldn’t stop.

Not the answer you're looking for? Browse other questions tagged story-identification novel elves or ask your own question.

7
Fantasy Novel - Female Protagonist who climbs a tower and encounters magical obstacles before facing off with a wizard
8
Fantasy novel about a warrior who battles a 'king' with the help of a magician
22
Science-Fiction Film Where Memories Are Extracted With a Vacuum
17
Fantasy Novel about a man named Q-something who finds a glowing rock in a pool and becomes king
21
Fantasy novel/series with young man who discovers he can use magic that is outlawed
7
2000s novel with a journalist trying to stop a Bill Gates character from taking over the world, said plot somehow involving the Dead Sea Scrolls
2
Fantasy novel involving a contest with mounts and targets, and eventually a confrontation in the dream world
5
Fantasy novel (series?) involving hibernating dragons who are harvested and a woman in a loveless marriage because her husband is secretly gay
9
What was the fantasy novel with a fire/fertility goddess named Fala and a sea god named Sur?