I have been trying to remember a comic book that I read in the early to mid 80s. I think it was a Marvel comic, but I am not certain. I recall that the protagonists were a team of young superheroes (late teens / early twenties). I think there were four of them with two men and two women. One of the men wore power armor. I think one of the women could fly. The other male carried an assault rifle.

At the end of the issue, the member who wore power armor fought against a villain that also wore power armor. One of them was gold and the other was silver. The villain had the hero down, but the hero managed to give it his all in one last uppercut punch.

I think the cover displayed the hero in power armor beaten into a wall.

story-identification comics
Share
Improve this question
asked May 7 '20 at 3:07

I found it! It took a lot of searching on Comicvine but I found it.

It was DNAgents issue #6 by Eclipse Comics. 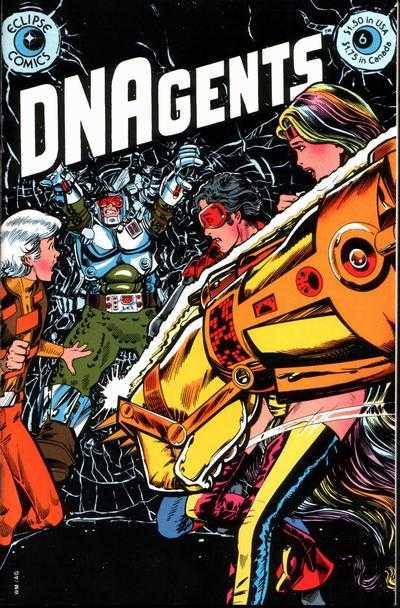 The DNAgents were products of genetic engineering, created (and therefore owned) by Matrix, a huge, multi-national corporation run by billionaire Lucius Krell, whose personal philosophy included the notion that governments had become irrelevant in a world now ruled by his kind. The first use of his company's human-like property was to rescue his daughter from kidnapers. He made them handle it because calling in anyone else, or even publicly admitting she'd been snatched, would risk alerting authorities to the ransom the kidnapers demanded, which included high-tech stuff that he didn't want anyone to know Matrix had stolen.

There were five DNAgents. Surge (whose super power was to generate energy) was the so-called "natural leader" type, but also dangerously hot-headed. Amber (who had lesser energy powers, and could also fly) was naive and overly-trusting. Tank (the super-strong guy practically every superhero team has at least one of) was, like a lot of big, strong guys in fiction, a Joe Palooka type, not quite as dumb or as good-hearted but leaning in that direction. Rainbow (who could project mental images and communicate through telepathy) was named for her long hair, which contained streaks of yellow, red, blue, etc. (a sub-plot involved her decision whether or not to expose her presumably rainbow-colored pubic hair in salacious photos). Sham (who could alter his appearance at will) was slight of build and extremely shy. All were like young children at first and matured as the series progressed, but never did grow up completely. An ongoing sub-plot involved the group's attempts to assert independence from Matrix.