A 1970's TV space show where a creature with long tentacles mesmerized people close, pulled them underneath, and then shot them out dried up

I thought it was in Space: 1999, but I went episode by episode and that didn't seem to be it.

I know the creature was in a dark room. People would be drawn to it and then they were pulled underneath it. I know the creature had long tentacle-like structures come out from it. I think it made oscillating sounds while people were being sucked in.

Then when it was done consuming them, they would be shot across the floor, sliding far away from it, all dried up and maybe covered in a film.

story-identification tv
share | improve this question | |
edited May 10 at 21:05

It has to be Dragon’s Domain from Space: 1999. One of the scariest things I saw as a kid. Tentacle monster inside a dark derelict ship, mesmerizing & oscillating siren sound that is hypnotic until in reach of the tentacles, single glowing “eye”, sucks the person in at the bottom on the floor, and spits out a burnt-up (dried) corpse with all life sucked out. Go watch it again on YouTube and be afraid.

Check out this link for image: https://m.imgur.com/gallery/7RQPvQU 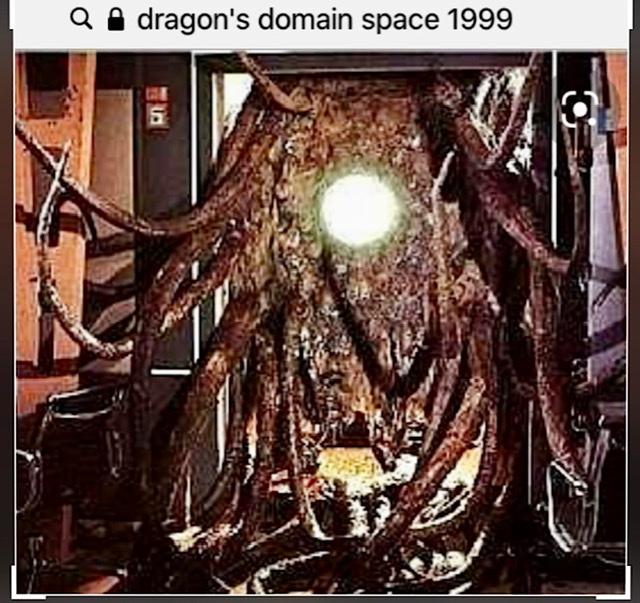 There's a Space 1999 episode dealing with such a creature (its title is The Dragon's Domain): but if it's not the show you're remembering, then it's possibly The Green Slime, a 1968 science fiction movie. These creatures electrocuted their victims with their tentacles and left them scorched and covered with a thin film of something: not the titular slime, which instead is a reference to how the invasion started.

In the trailer you can see the creatures attacking and how their victims were left after they had done with them.

As a side note, in the late Seventies this movie also inspired a two-player board game, "The Awful Green Things From Outer Space", that is published still today.

Shot in the partial dark: Doctor Who: The Creature from the Pit, originally airing in November 1979. 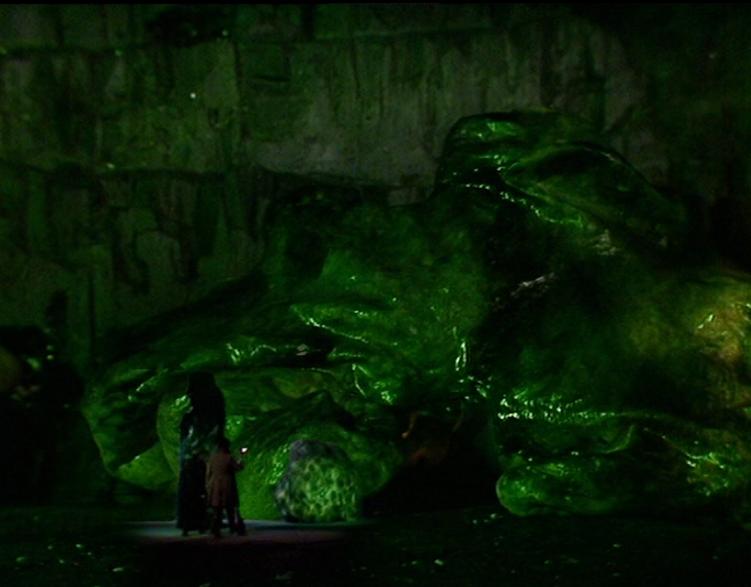 I know the creature was in like a dark room

and people would be drawn to it

From the Tardis fandom ("Tfan", subsequently) page for this episode: "The plate [A McGuffin (warning, TvTropes link) the Creature is seeking] activates and Torvin and Edu fall under its hypnotic effect." ... "The hypnotised Torvin and Edu approach, still carrying the plate, which they place on the creature."

and soon they were pulled in underneath it.

Tfan: "the creature squashes the Doctor" and "[the Creature has] his revenge by crushing Adrasta to death".

The Creature (Erato)'s page at Tfan: "However, as he did not eat people, they either died of fright or were crushed under Erato's weight."

I know the creature had long tentacle like structures come out from it.

A different Tfan page: "They had no true limbs, but had two large pseudopods. One pseudopod was shaped like the letter Y, while the other was simply a large tube."

I think it made oscillating sounds while people were being sucked in.

I can't think of a sound effect from the Tom Baker run of Doctor Who that fails to match this description.

Then when it was done consuming them, they then would be shot across the floor sliding far away from it, all dried up and maybe covered in a film.

You might be describing the victims of the antagonist's (plant-based) goon squad, the wolfweeds. From that page, "They appear to be predatory and are able to produce a web-like substance to immobilize their prey."

2
A zombie or alien horror movie whose protagonists are young adults
5
Trying to find an older book where the main character gets pulled into a parallel universe where people fight with powered armor and energy swords
11
Horror where monkeys would call people on the phone and then go to their house and kill them
11
Fantasy novel with terrifying trees where people were sacrificed to them cocooned alive and put inside them
17
Trying to find short story about somebody who knew everyone on Earth
3
What was the reason for the implied fantasy plot in this Square One TV music video?
4
Monster in a house which absorbs people and then looks like them