Is the thin design of Romulan ships a vulnerability in Star Trek?

In Star Trek, we see that Romulans often use design lineages following the shape of birds. The Romulan Bird of Prey seen in TOS has two wings serving as nacelle pylons outstretched from the port and starboard sides. Romulan D'deridex class Warbirds have wing-like nacelle pylons that meet at the nacelles and hold the nacelles in place.

However, aren't the excessive use of long wings a vulnerability?

In the Star Trek Picard episode, "Absolute Candor," La Sirena and the tiny asymmetrical ship Seven is piloting slices off the BOP's starboard wing with their phasers. The nacelle pylon was at the end of the wing as it should have been, and thus the starboard nacelle was lost. The BOP would have lost a large amount of power.

The new Romulan so called "warbirds" have extremely long wings that reflect the body-to-wing proportions of an albatross or condor.

This shows a fleet of these thin and long-winged ships. 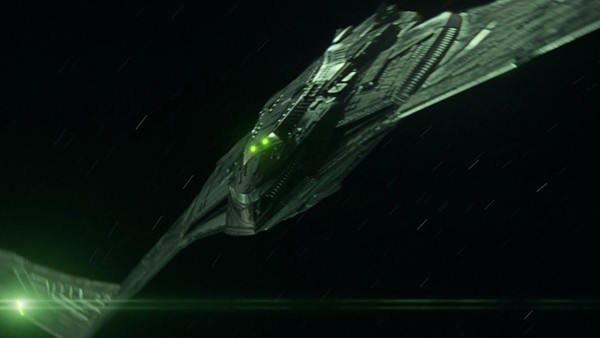 That clearly shows how thin the wings are.

A ship like a Borg cube would be almost impossible to slice in that way, because of its armaments and shields, but also because it is so compact.

Even a Federation ship is not that flat and thin.

The only Federation ships that seem to be as thin as the Romulan ships are the Synth ships that were seen flying around and exploding Mars.

Klingon Birds of Prey also seem to have rather thin wings.

So again, aren't these thin wings a vulnerability?

There are some considerations, originating from various aspects, that can be made about the possible efficiency of this kind of design.

According to Roddeberry guidelines about starship design, warp nacelles should be visible to each other; this require them to be positioned outside the main hull, and having relatively small/thin pylons means using less materials and requiring less systems; on a big project like a starship, you try to economize resources, if you can use let's say 10% less resources by not adding more than is required, it means that you can field one more ship every ten.
Even if the nacelle visibility rule seems to be mostly valid for Federation ships, it is likely that even other Empires' technologies could have similar positioning requirements and that the overall design is affected by the functional aspects of the ship systems.

The thickness of a single structure, like the wings or the nacelle pylons, is not the real factor to be taken into account; the real important thickness here is that of the hull/armor, instead of the whole structure: in example, consider that a big portion of the secondary hull of a Galaxy-class ship is occupied by the deuterium tank, which lies just below the hull; a direct hit opening an hole in the hull could potentially do more damage here rather than on a warp pylon, even if the "shape" of the ship is more preserved; this reasoning of course is valid also for other ship classes, not just for the Galaxy.

Romulan ships, like all other ships in Star Trek series, are equipped with shields, which serve as the primary defense against attacks towards the ship itself. This reduces the need of structural strength and thus of "bulky" ships, because if you count the total firepower of an enemy as 100%, a large percentage of this damage is virtually absorbed by the shields.

Romulan ships are equipped also with cloaking devices; if the battle won't go well, let's say your ships are almost depleted, a viable strategy could be to just hide and adopt a more cautious approach to the battle, maybe made of rapid hit-run-hide flybys rather than a more direct tactic based on heavy artillery fire; in fact, given the general Romulan attitude, based on subterfuge, a sneakier approach seems reasonable and even desirable if you possess the technology to do so.

Probably one of the most important aspects, having a ship with thin structures could also be a tactical advantage. If you offer to your enemy the least wide profile of your ship, let's say the frontal one (like the cited Romulan ships), you give your enemy far less surface to be targeted; one could argue that the enemy don't stand still and will try to outmaneuver you, but so do you; in the end having a thin profile is potentially always a problem for the enemy and a possible advantage for you. While this is true on one-to one battles, it will become even more relevant when two fleets in a line or wall formation are facing, since you must outflank an entire formation and not a single ship.
it is basically the same principle of aerodynamics, like in the wing shape of modern planes, but instead to offer the least possible surface to air to avoid friction, you offer the least possible surface to enemy to avoid weapons.
To use one of your examples, a Borg cube can't use this kind of tactic, because it don't have a profile that offer the least possible surface and can be easily targeted from every position; so in this respect being bulkier is a disadvantage, not an advantage.

Even other Empires use ship designs which feature small/thin structures, like the aforementioned Federation warp nacelles; but also Klingon and Cardassian ships, just to cite two prominent examples, have designs with relatively thin structures if compared to the general shape of the ship/starbase itself.
Being so evenly spread, it seem very likely that this kind of design, in this fictional universe, don't constitute a great problem in the end, so there is no reason to suppose than a single Empire, the Romulans in this case, should not adopt these principles.

And of course, all these considerations must face one fundamental truth: no matter how strong your ship is, if the plot need it to be damaged or destroyed, it will.

Absolutely not; they are actually pretty optimized for what they do.

When designing a warship there generally are three different approaches: battleships, carriers, and glass cannons. 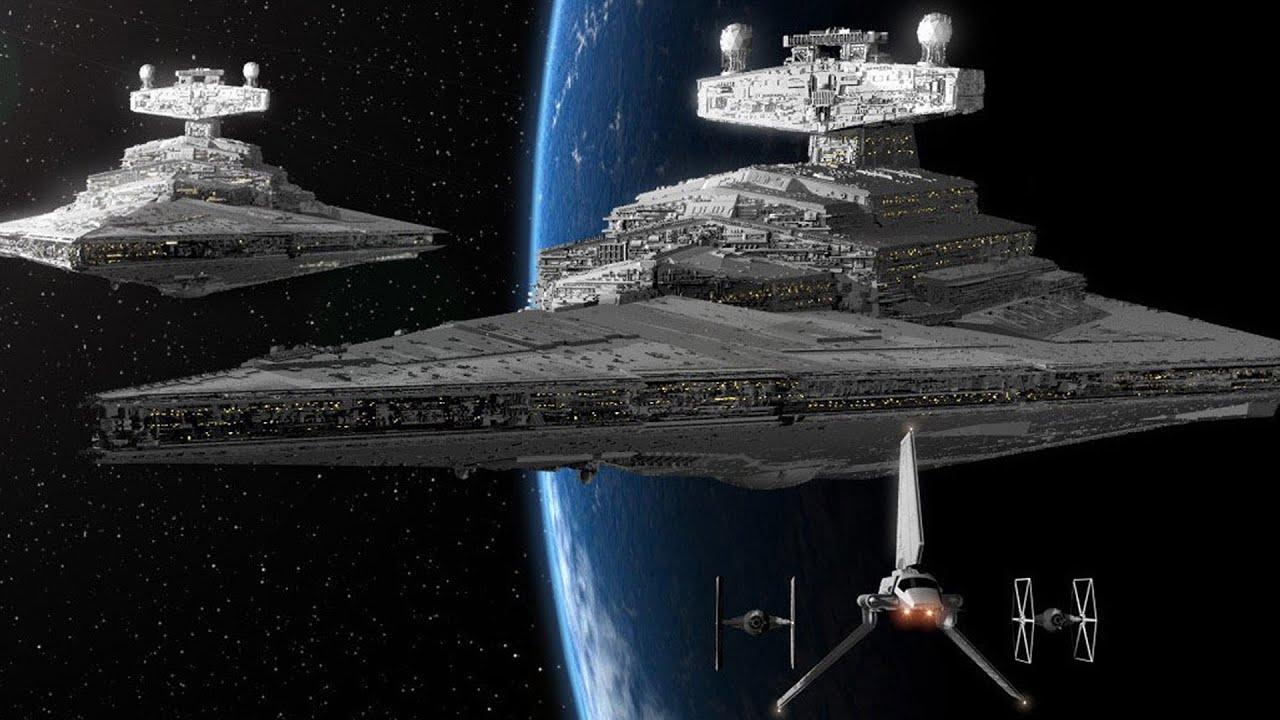 Perhaps best exemplified by the Imperial Star Destroyer, battleships use a bunch of direct-fire lasers/masers/railguns to do damage. Since these weapons individually don't do much damage, this type of ship is characterized by large, blocky shapes to them to give LoS to as many cannons as possible. While this makes it possible to focus large amounts of firepower on a target, it also makes these ships the quintessential "Big Slow Target". 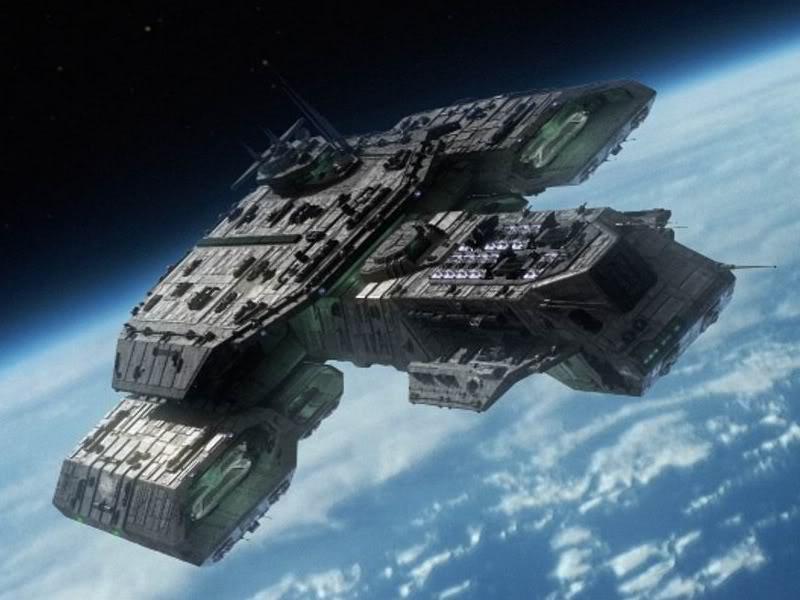 Generally seen more in books than in film (they don't look very "pretty"), carriers use lots of missiles or fighter-bombers to dish out damage. As a result, while they still need a lot of surface area, they don't need it to all be facing the enemy.

Generally using a single large laser or railgun, glass cannons don't have anywhere near as much of a space requirement as the other types. As a result, they are often built in the shape of a tube or wing, to minimize the amount of damage they inevitably receive while reloading.

Since the Romulans like to use cloaking devices, their ships need to be both agile (it's no use having a cloaking device if people can just shoot at their last known location) and be able to do large amounts of damage at once (they have to come out of cloak to fire, which leaves them vulnerable). As a result, they gravitate towards the Glass Cannon paradigm. The important thing to note is that the wings aren't much of a liability, as the whole point behind Glass Cannons is that you don't stick around after firing, so shields are usually capable of blocking any hits they receive.

5
Can the Federation's "Quality over Quantity" (k-strategy) philosophy defend itself on its own?
2
Klingon war ships to Romulan
0
Is Star Trek: Picard mixing with the Kelvin Timeline
4
What's the smallest Star Trek ship of the "classic design"?
10
Did previous Star Trek series establish Romulan distrust of androids?
4
Where are the warp nacelles on the new Romulan ships in Picard and the Klingon Birds of Prey seen throughout the series?