I recall seeing a film in the 80s that was a sci-fi horror film vaguely to do with genetic experimentation. There was a small creature that had tentacles that escaped and went around causing carnage. This creature was somehow genetically linked with one of the main characters. This is a very vague description but other than that I can only recall two scenes – one where the creature hides in a womans bag and when she is driving, it escapes and wraps tentacles round her face and neck and causes the car to crash. The other is towards the end and a bunch of characters are standing on a floor that collapses and they all fall into some kind of liquid. Other than that there are a number of laboratory based scenes.

Sorry this is so vague, but maybe someone will be able to identify the title from the above description.

This sounds like it could be The Kindred http://www.imdb.com/title/tt0091343/ 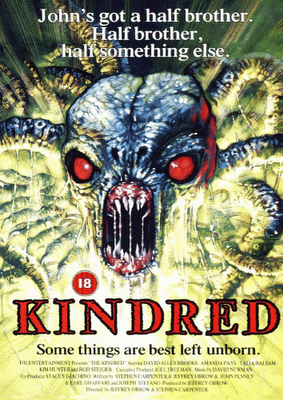 It is hard to say for sure - I have not seen it for years. It doesn't seem to have a DVD release

10
Identify horror film/TV show where protagonists ostensibly hunting a Gill-Man are transformed into same
4
Looking for an obscure 80s movie that happened in a neighbor's house at night
7
Identify This Movie: Robed creature sent by white-noise bad guys to abduct little girl
6
1960's horror film with tentacled slug-like creatures
8
Horror movie where a guy loses his hand after putting his hand INTO a mirror?
13
Horror sea creature film
15
Horror film about a man brought out of cryogenic suspension without a soul, around 1990