I'm trying to remember a classic-era short story about a Martian landing I read in an anthology sometime during the late 1980s-early 1990s. It was an old anthology, probably from the 60s. I don't think it's any of the Bradbury stories.

In the story a landing party from Earth arrives on Mars and encounters Martians that can alter their appearance to mimic anything. One of them may have been imitating a piece of the astronaut's equipment at some point. They end up with multiple copies of themselves trying to identify the real earthlings before vaporizing the alien impostors and returning to Earth.

I think there were 2 astronauts and I don't remember how the first one was identified, but I remember some dialogue about the second where the other guy says something like "What you did required the coordination of hundreds of muscles across most of your body, X number of reflexes, brain areas... I took the gamble that the alien's shapeshifting wouldn't be able to replicate this" Then the other guy asks "What did I do?" and the last line of the story is "You sneezed."

story-identification short-stories
Share
Improve this question
edited May 15, 2020 at 17:53

Part of the problem is that the Martians are telepathic, so the astronauts can't use things they know to detect the Martians.

The astronauts are in a mixed group of duplicates of themselves; Penton uses Blake's sneezing to kill all the fake Blakes. Blake gets on their ship and fills it with toxic gas to reveal that a supply chest, 2 crates of "specimens" and a pipe are all disguised Martians. Finally Blake bluffs the fake Pentons with the threat of tetanus (to which the real Penton has been inoculated).

It ends much as you recall:

"There's one thing -- ahhh -- " he straightened as the incredible glare died in thin air. "I want to know. How in blazes did you pick me out?"

"To do what you did requires some five hundred different sets of muscles in a beautifully coordinated neuromuscular hookup, which I didn't believe those things could imitate without a complete dissection. I took the chance it was you."

"Five hundred sets of muscles! What the heck did I do?"

Rod Blake blinked slowly, and slowly his jaw tested again its supports and their flexibility. 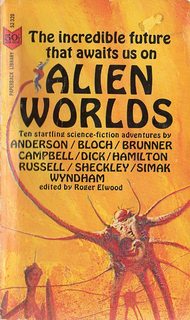 Otherwise the only other anthology it appeared in was Before the Golden Age (1978, ed. Isaac Asimov), but that had a bunch of different covers depending on the edition, U.K. vs. U.S. printing, etc. (And strangely it was in different volumes depending on which U.K. edition.)

You can read the original novelette from Thrilling Wonder Stories, December 1936 at the Internet Archive.

6
What story features Martians that remember everything?
3
Short story including aliens who are identified with Loki and Thor (from anthology c. 1970)
26
Short story about astronauts landing on a planet of shapeshifters
10
Old short story about ancient Martians stranded on earth
10
Short Sci-fi story about a sentient planet/creature that exists to seed the universe with life
4
Movie/Episode: Time travel story resolved by alien sneezing
5
Old B movie with shapeshifting alien
7
Martians on Everest
7
Short Story (Maybe Bradbury) That Involves a Cloud or Nebula Which Traps Radio Waves