I'm looking for a book from the 90s or maybe the 80s. An Alien Academy graduate goes to a planet to be an ambassador to a bird-like race. She lives with them in a nest and learns their dances and communicates via sign language.

story-identification novel aliens
Share
Improve this question
edited May 15 '20 at 19:56

This may be A.C. Crispin's StarBridge series, specifically the second book, Silent Dances, published in 1990. 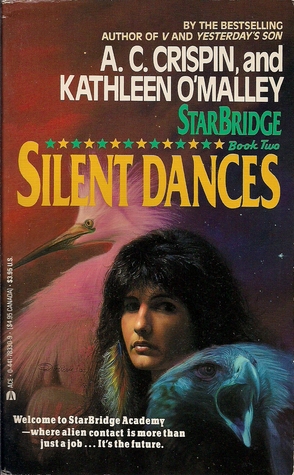 Deaf since birth, Tesa is the perfect ambassador to the alien Grus, whose sonic cries can shatter human ears.

But her mission is harder than it looks. The Grus are not alone on their world.

They have deadly enemies, both natural and otherwise. And if Tesa is to save all life on the planet, she will have to make peace with not one alien species... but -two-.

From the TV Tropes entry on Signed Language:

The second book in A.C. Crispin's StarBridge series deals with a species of crane-like aliens who communicate primarily in sign; vocalization is used only as emphasis or warning...and their voices are so loud and piercing that they do physical damage to fragile human eardrums. The protagonist is a deaf cultural interpreter who is brought in to live with them, meaning that most of the book's dialogue is in sign.

19
Late 80s - mid 90s Disney TV movie with mechs
6
Sci-fi novel about a planet w/ a dying sun, bird-like or penguin-like beings, telepathy, and blue-green crystals?
26
Sci-fi book about humanity barely winning a war with an alien race, after which the protagonist discovers some secrets about the conflict