Looking for 1950's era book US is surrounded by a force field, and a British pilot lands and finds US degenerated due to radiation

I'm looking for 1950's era book. US is surrounded by a force field, and a British pilot lands and finds US degenerated due to radiation.

I read this book in my grandparents' house in the late 70's/early 80's, that had been left behind by my uncle, probably in the late 1950's before he went to college. It possibly could have been a little earlier since another book I read then was the hardback Hal Clements' A Mission of Gravity that was published in 1954.

The book I am trying to find was a paperback containing two novels (novellas?) with the cover art on both sides of the book and to read it you would flip it over. I don't remember the publisher.

The plot is that after WWII the US had the atomic power and the bomb, and isolated themselves from the rest of the world and technologically was thought to be much more advanced. The British RAF pilot is doing reconnaissance flights notices the barrier is down and flies in and lands. There he eventually finds many technologically wondrous things such as an underground transportation system connecting the major cities that can transport him across the country. Eventually he ends up in Washington, D.C. The story becomes about how the dependence on atomic power leads to the degeneration of the people. I am fuzzy about how that worked but there was maybe devolution or loss of intelligence or loss of fertility. Hence one of the elite deciding to lower the barrier and let the British pilot land and explore with options of restarting interactions with the rest of the world. I think the time was sometime after 2000, but not dramatically so.

I guess there's a chance the that the pilot was Canadian instead of British, and I don't remember exactly if it was just the United States, or all of North America that had the force field.

story-identification books
Share
Improve this question
edited May 17, 2020 at 23:04

Atom Curtain -- later known as The Atom Curtain -- by Nick Boddie Williams. Originally published in 1956 as Atom Curtain, half of an "Ace Double" paperback as I thought. (The other half was a story by Gordon R. Dickson.) This cover-scan may look familiar? 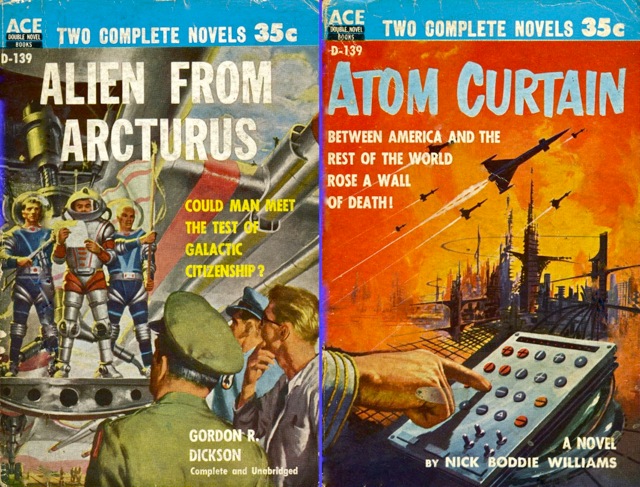 Here's some text from the Amazon.com listing for a modern reprint which includes the Williams story -- with the word "The" added to the title, and then the whole thing is combined, for some reason, with a story by the late Gardner Fox. (Don't ask me why they did it that way instead of just reprinting the old Ace Double's contents.) You will see that this description of The Atom Curtain matches very well with your recollection of the basic premise of the plot, and the timing is right for your uncle to have bought it new in 1956, and then left it behind when he went off to college.

The first novel is Nick Boddie Williams’ “The Atom Curtain.” He broke the barrier to a continent in exile. For two hundred and seventy years America had been totally cut off from the rest of the world by an impenetrable wall of raging atomic fury. To the frightened countries of the Old World, what had once been the greatest of all powers was now the most fearful of all mysteries. No man ached to know what lay behind that frightful barrier more than Emmett O’Hara, restless air-sentinel of the International Patrol—whose American ancestors had been stranded in Britain the day the Atom Curtain was raised. Then, on December 20, in the year 2230, while on routine patrol, O’Hara did the impossible. He broke through the barrier—and lived! But the full story of O’Hara’s discoveries and adventures in Atomic America is so utterly breath-taking that readers are sure to rate it a classic of modern science-fiction.

This reprinted edition only seems to be available in paperback; not as a Kindle e-book. Or you might be able to track down a copy of the original Ace Double paperback and get it cheaper -- after I typed that, I searched on Amazon again and found this link which does seem a bit cheaper. (Although I don't know what kind of shape the paperback's spine will be in after so many years.)

17
Book about a world of women where a man crash lands trying to find his way home?
16
Dystopian book series: girl goes out of the barrier her society lives in because of radiation
22
Sci-fi book about a male entering a competition that he wins and gets recruited by millitary
10
Looking for the name of an 80s-era sci fi book
7
Book where angel finds a planet full of humans and crash lands there losing its memory
4
Kids/YA chapter book with invisible spaceship and force field, 1988 or earlier
7
SF short story by British author WW2 Burma
11
Kids' book where poor boy finds magic stone in field and swallows it, becoming a dragon