Fantasy movie about a mansion with magical creatures that is similar to the 2008 series “Sanctuary”?

Here are some of the things I remember from the movie:

The action began with something getting loose and the protagonist being aware of the event, at some point the secondary lead meets up with her, reveals 'reality' to her, they go through some various trials as they work to save the creatures, maintain some balance?, eventually they succeed and all's well that ends well. It is a love story, feel good, fun, but with action and suspense.

To differentiate it somewhat from similarly themed shows - it is closer to Sanctuary or Fantastic Beasts and Where to Find Them than Spiderwick Chronicles or Bridge to Terabithia.

story-identification movie
Share
Improve this question
edited May 24 '20 at 18:46

Pretty sure you're looking for Princess from 2008. From Rotten Tomatoes:

A reclusive princess and a directionless young man embark on a quest to save the world's mythical creatures from becoming extinct in this romantic fantasy for the entire family.

Takes place in a castle and IIRC she has to find someone next in line - a Healer or a Seeker or some such - within a week to take care of these creatures (which are mermaids and elves etc.). And it was indeed a TV movie (it aired on ABC) and is basically a feel-good love story. You can watch the trailer here. 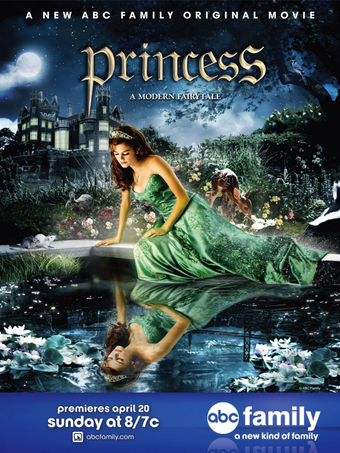 Young Pete Lender (Bradley Pierce) is setting up traps around his house, explaining to his parents that things in their house are being stolen, despite his parents believing they are simply misplaced. However, it turns out that a family of tiny people ("Borrowers"), are living in the house, borrowing stuff without being seen. Pod Clock (Jim Broadbent) and his children, Arrietty (Flora Newbigin) and Peagreen (Tom Felton), make their way through the kitchen to "borrow" the radio's battery.

Arrietty, while treating herself with some ice cream in the freezer, is accidentally shut inside just as the Lenders return. Pod manages to rescue Arietty, but jams the ice cube tube in the process and is forced to leave one of his gadgets behind, which is found by Mr. Lender. Meanwhile, the will of Mrs. Lender's aunt Mrs. Allabaster is the only proof that the house rightfully belongs to the family, yet their lawyer Ocious P. Potter (John Goodman) cannot find it and has already made plans to demolish their house in order to build condominiums on the land, and the Lenders have until Saturday to move away.

Arrietty is trapped by an astonished Pete, who explains to her that the house is being demolished for want of Mrs. Allabaster's will, meaning that both families will have to move. After Arrietty explains the situation to her family, Pod reluctantly agrees to have the family move to the new house, despite being somewhat upset that Arrietty has defied so much about the way of the Borrowers. Unfortunately, during the journey, Arrietty and Peagreen fall out of the moving truck and make their way back to the old house, where they find the new house on a map.

The only thing lacking is 2nd princess.

Main character finds out that stories of his grandfather are true once his grandfather is killed by a monster. Travels to a Welsh village and through time. In the past, he meets certain "peculiar" children with magical powers.

The time bubble is being maintained by Miss Peregrine, an umbryne. At a certain moment in the movie, another umbryne joins them.

9
What is this old movie that featured round, flat creatures that killed by touch?
8
Fantasy novel about a warrior who battles a 'king' with the help of a magician
9
TV series about a man living in a mansion with a ghost
6
Movie with giant creatures invading our planet from another dimension or portal, maybe based on Stephen King novel
11
Children's fantasy series very similar to Narnia
6
Cartoon fantasy film with magical or elemental stones/crystals
4
Live action series or movie with kids sucked into a video game
10
Movie: boy is coming of age to save the world, magical fight on a bridge
7
Movie called “Predator” or “Predator 5” with Predator-like creatures inside of people