80s (or earlier) children's book series about a museum, time travel, and dinosaurs

In the mid-1980s, the Timberland Regional Library branch in downtown Olympia, Washington had a series of books about some children who discovered that a museum exhibit about dinosaurs could transport them back in time to see real dinosaurs.

Things I can remember:

This is a partial match for the Magic Treehouse series by Mary Pope Osborne, in which a brother (Jack) and sister (Annie) discover a magic treehouse, enchanted by Merlin (of King Arthur fame), which enables them to travel in time through a series of books within the treehouse. All they have to do is read/look at a part of the book and (IIRC) wish to go there, for them to be transported.

They have a whole series of adventures in both real and mystical times, but there is one book in particular "Dinosaurs before Dark", the very first in the series, in which they are transported to the time of the dinosaurs. There have been a few covers, of which one is below: 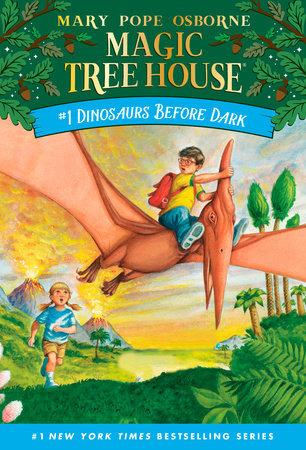 I don't believe that there is a camera involved, but the covers all include some green - brighter in some than others, and there are children involved, though usually just Annie and Jack.

The series is The Dinosaur Machines by Eve Bunting. The book titles are below.

Some of the covers can be see here.

Not the answer you're looking for? Browse other questions tagged story-identification time-travel childrens-novel dinosaurs or ask your own question.