Two kids go back in time by accident

There’s this book I remember reading this like 2 or 3 years ago about two kids that accidentally time traveled back in time due to some mistake in a time machine. They just happened to be near the machine at the worst time. I remember the story smoothly going back in forth between the present and the past that the kids were in.

Scene changes and we’re back with the father and I think they’re panicking wondering where the kids are and they call the cops I think and they get reported missing. All while (well not while but you get what I mean) the kids are traveling with the stranger to the nearest town.

I think this was a trilogy and one of the critique quotes I think compared it to Harry Potter. The cover was a nice art animation style cartoonish, friendly (nice to look at).

story-identification books time-travel
Share
Improve this question
edited May 23 '20 at 10:52

The Gideon the Cutpurse trilogy by Linda Buckley-Archer. 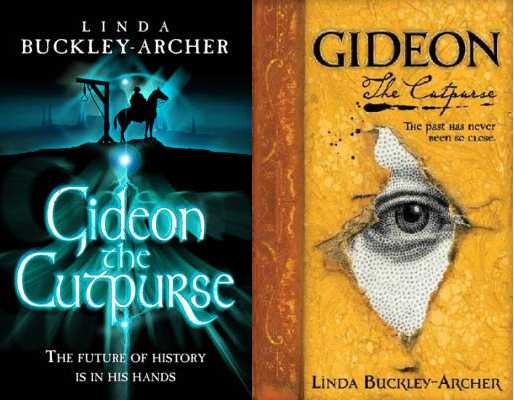 Gideon Seymour, cutpurse and gentleman, hides from the villainous Tar Man. Suddenly the sky peels away like fabric and from the gaping hole fall two curious-looking children. Peter Schock and Kate Dyer have fallen straight from the twenty-first century, thanks to an experiment with an antigravity machine. Before Gideon and the children have a chance to gather their wits, the Tar Man takes off with the machine -- and Kate and Peter's only chance of getting home. Soon Gideon, Kate, and Peter are swept into a journey through eighteenth-century London and form a bond that, they hope, will stand strong in the face of unfathomable treachery.

As for the comparisons with Harry Potter, the second books boasts on its cover:

5
time travel kids show
9
What was this book (time-travelling kids, an old house, a wizard, turning into animals...)
2
Kids with special abilities flee being sent to camps, gain friends
11
Looking for a cartoon where three kids wake up in a different world
4
Movie where 3 kids visit a museum, travel back in time and meet a baby emperor
9
Book about a group of kids abducted from various historical disasters and then live in a time loop of 9/11 have to stop neo-nazis
9
Time travel show from the 90's featuring kids visiting a diner to go on time travel adventures with the owner
5
Book about two kids who travel through history and seeing, among other things, the death of Archimedes