Probably printed in the 1980s.

As I recall it was split between reality and a fantasy world that resembled 1600s Spain. The cover had a man riding a winged horse.

There is a book "Orlando Furioso" by Lodovico Ariosto written in 15th-16th century. The title rings a bell that makes me wonder if the title and perhaps plot was reused.

The lead character dies at the end.

story-identification books
Share
Improve this question
edited May 25 '20 at 22:06

It's possible this was The Castle of Iron by L. Sprague de Camp and Fletcher Pratt or the collection The Compleat Enchanter (1977) that contained it. 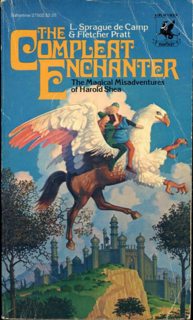 The book cover depicts a hippogriff, not a horse, but it is a winged steed.

I don't remember any of the heroes dying, but Belphebe is struck nearly fatally with an arrow that finally helps her regain her memory.

The Wikipedia page for Orlando Furioso lists The Castle of Iron as one of only a handful of popular fiction works based on it, and none of the others seem a better match.

This sounds like The Incompleat Enchanter in part. This is the cover I am thinking of, although it's a gryphon, not a winged horse. The third book is literally set in the world of Orlando Furioso, and it involves characters from our world traveling to it (and other worlds earlier), but the character does not die in the end.

How about Ariosto by Chelsea Quinn Yarbro, 1988.

In an alternate-world Italian Renaissance where the Italian states have formed a federation, the great epic poet Ludovico Ariosto is writing a fantasy adventure set in the New World that reflects the difficulties besetting his patron, Damiano de' Medici. While the Cerrochi in Ariosto's fantasy battle the evil wizard Anatrecacciatore with the help of a heroic version of Ariosto himself, politics and skullduggery plague the Florence-based court of Italia Federata, in which Ariosto becomes enmeshed when he chooses to support the Medicis against those seeking to fracture the Italian union