I read a paperback book no later than the 1976 (I strongly believe that I read it before I graduated high school, possibly years before). I think I bought it from a garage sale, so it may have been even older. The book was in English.

This wasn't a particularly good book, and I don't remember the author's name. The cover was, I believe, reddish with some sort of machinery on it, but I don't know for sure.

I do not believe this is Mutant 59: The Plastic Eaters.

The Man Whose Name Wouldn't Fit (Or, The Case of Cartwright-Chickering) by Theodore Tyler. First published way, way back in 1968, when the whole idea of having a mainframe computer start handling a large corporation's payroll records, etc., probably using lots of "punch cards" in the process, was considered cutting-edge technology, and nobody had ever seen or heard of the idea of the company having hundreds of computers placed on the desks of the individual employees. (Since Apples and other varieties of "affordable personal computers," as we understand them today, had not yet been invented!) 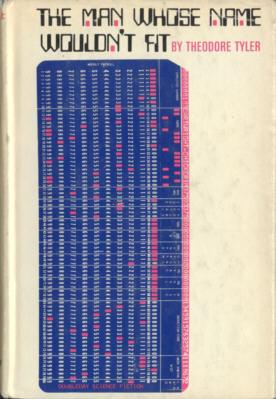 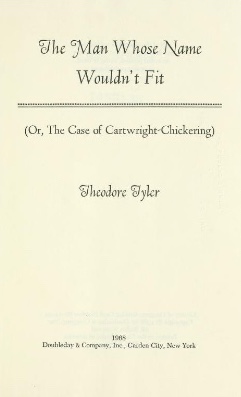 I checked out a copy from a library, decades ago. The title character's name is Arthur Cartwright-Chickering. The plot goes as you describe (as far as I can remember), and a review on Amazon describes it thus:

Anyway, Mr. Cartwright-Chickering stumbled across a way to fight back against The Machine: a mold with a taste for computer tape, cultivated in dilute grape juice. This discovery can be chalked up to his nephews or grandsons having filled their water pistols with grape juice (before their mother caught them and made them dump them out), a missing plug, and a bit of moldy soap used to plug the gun...

I believe the computer software in question could only handle employee surnames of 20 characters or less. With the hyphen in the middle, the main character's surname was a whopping 21 characters, and so his name just missed fitting neatly into the necessary spot in the computer's database. He was the only person on the payroll whose name created such a problem. From the viewpoint of the senior executives, it just wasn't worth the hassle of paying someone to reprogram things to accommodate him alone. (Again, this was over half a century ago. Things have changed a bit.)

I seem to recall one of the executives saying approvingly that one of the secretaries on the payroll had a perfect name: Ann Pym. Three characters in the first name; three characters in the surname; making the whole thing very concise. The attitude seemed to be: "Why can't all our employees do it that way?" In fact, Ann Pym was very sympathetic to Arthur's predicament, as I recall. (I'm not sure if she was also Arthur's own secretary, whom you mentioned above. It's been too long.)

Here's a link to an Amazon page for the book. Apparently the text has never been converted into a Kindle e-book, so if you want to refresh your memory, you may have to order a secondhand copy of a paperback or hardback edition, or you could check it out in ePub or PDF format from the Internet Archive or in hardcopy from a conventional library.

8
Trilogy where the last book features a man whose arm has been cut off
7
Identify book or long story in which a young Rudyard Kipling appears out of his time
8
Story about a man going insane because of his obession with computer c.50s-60s?
12
Story about a man on a spaceship who plays music to earn his living in the ship
11
Short story featuring microbes that eat plastic and rubber, causing regression of technology
3
Paperback book, read in the 1990s, involving a man's son playing a too-good pirate video game with friends who disappear
4
Book about the last female vampire-lycan hybrid